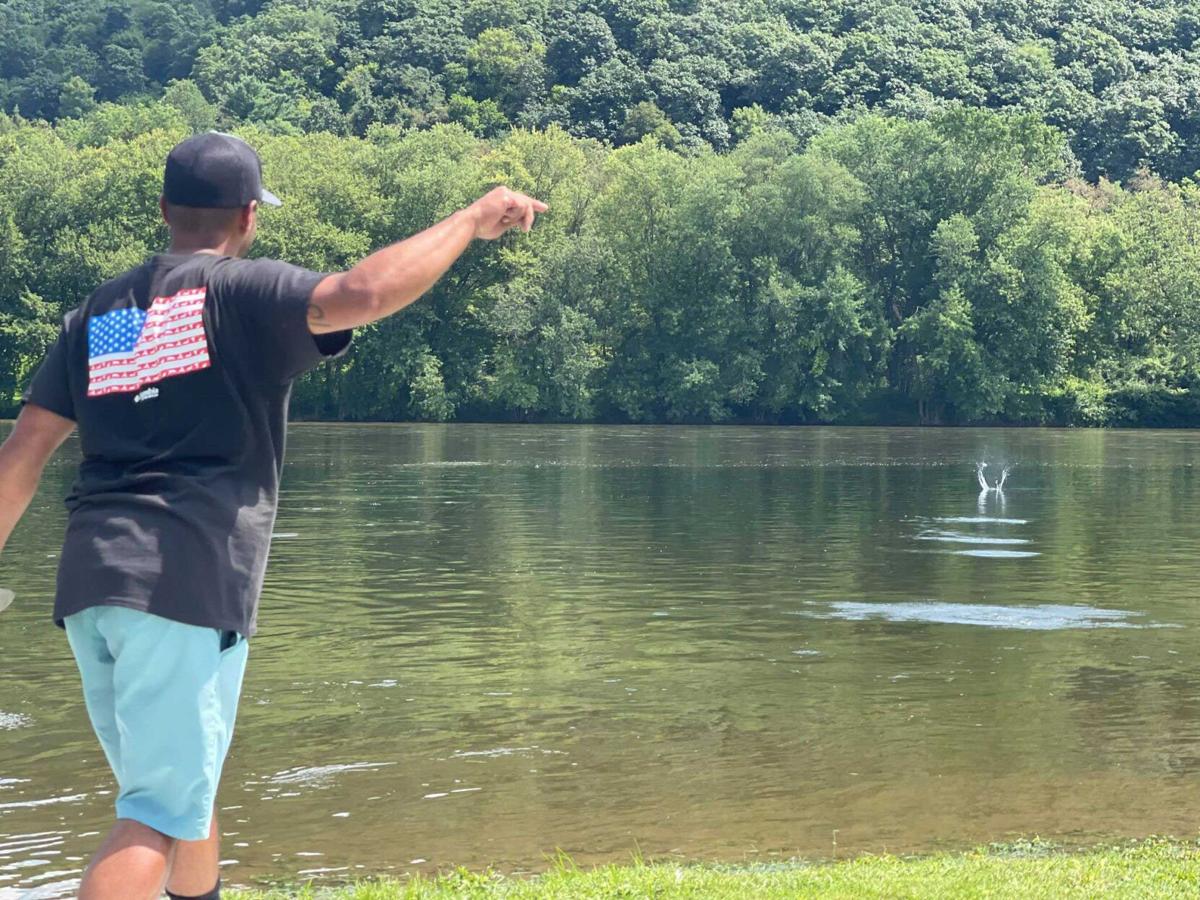 Enzo Ferrari, of Baltimore, was among the professional stone-skippers at the Rock In River Festival on Saturday afternoon. (By Stacey Gross) 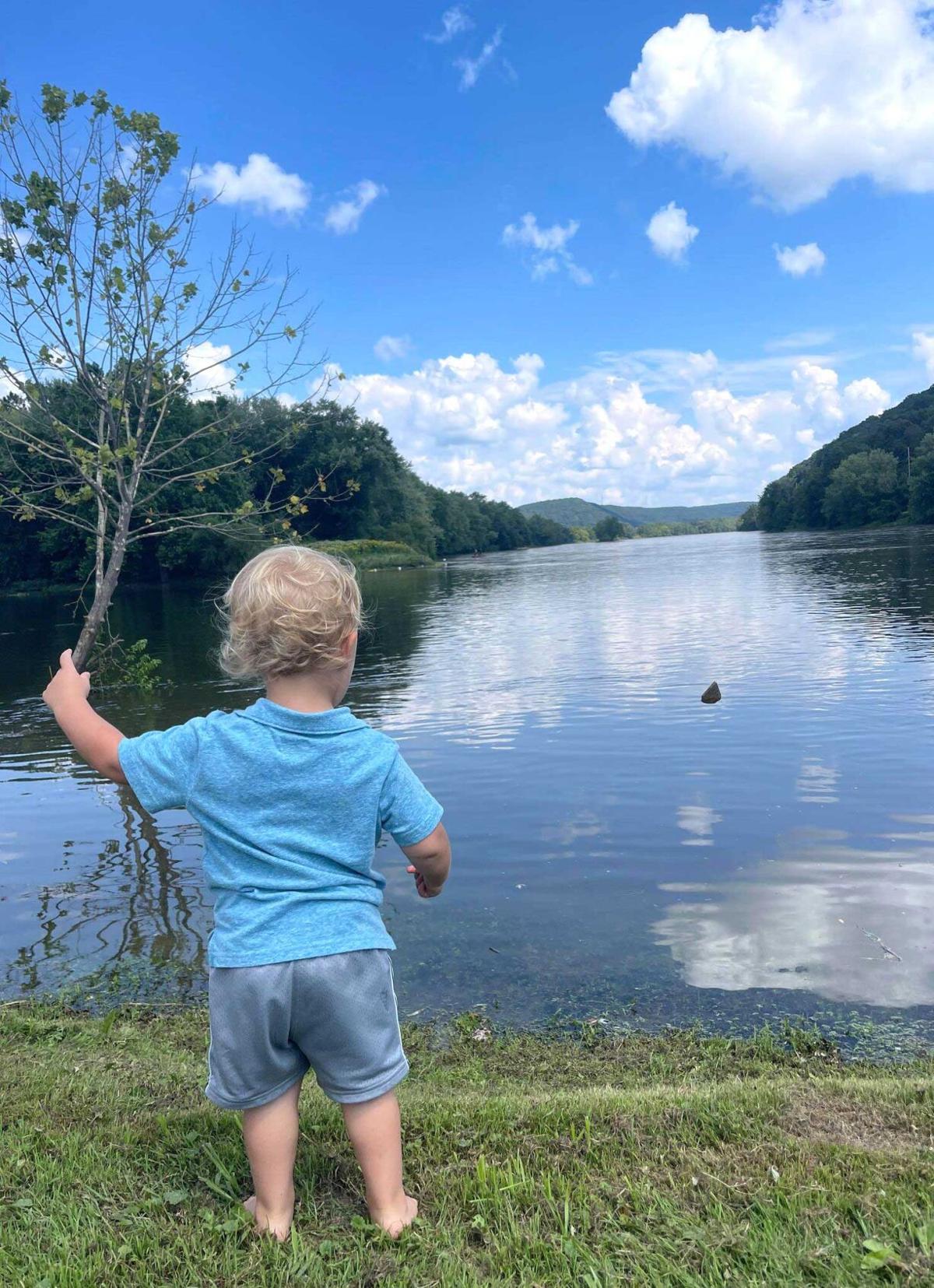 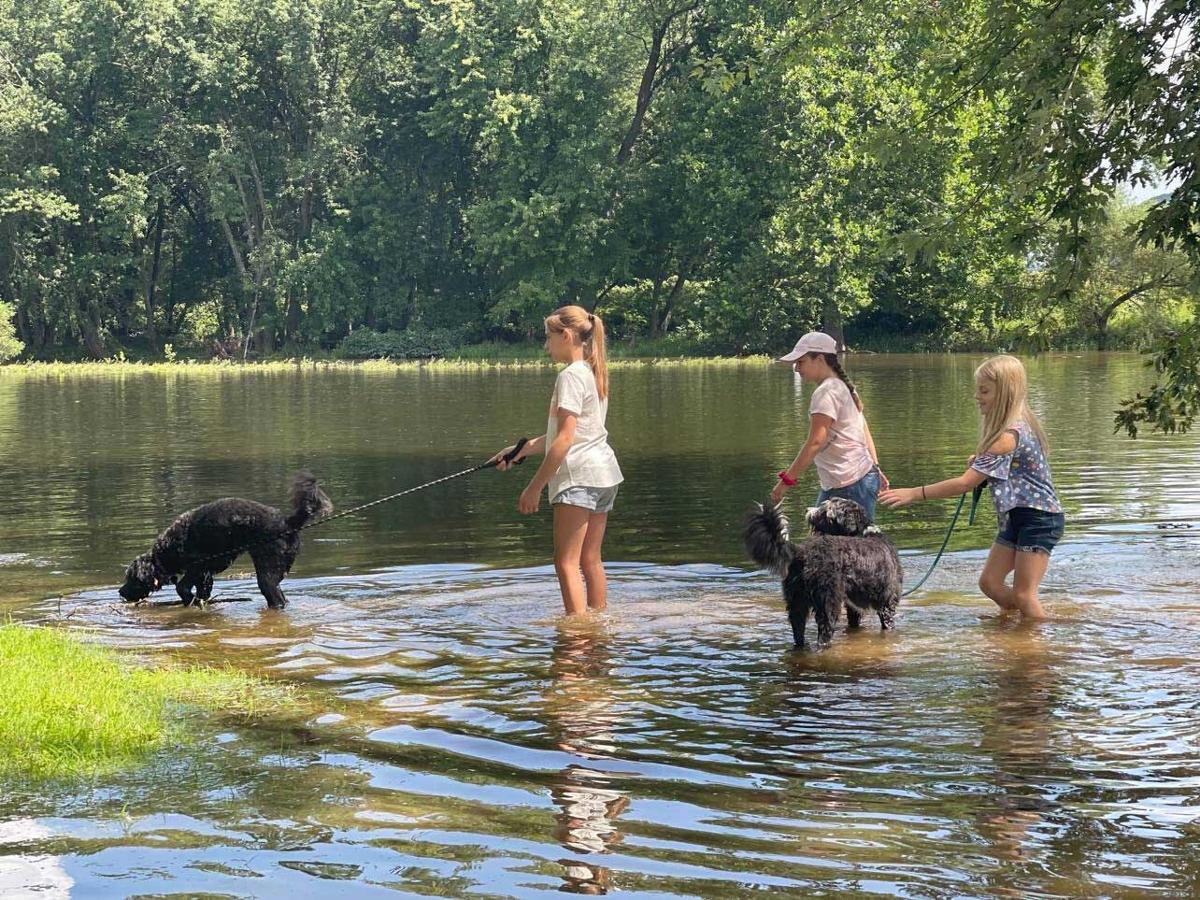 Clair Marie Persing, 13, Abby Wolfe, 12, and Zoe Wolfe, 9, all of Franklin, cool off with dogs Hailey and Lola at the Rock In River Festival on Saturday afternoon. (By Stacey Gross) 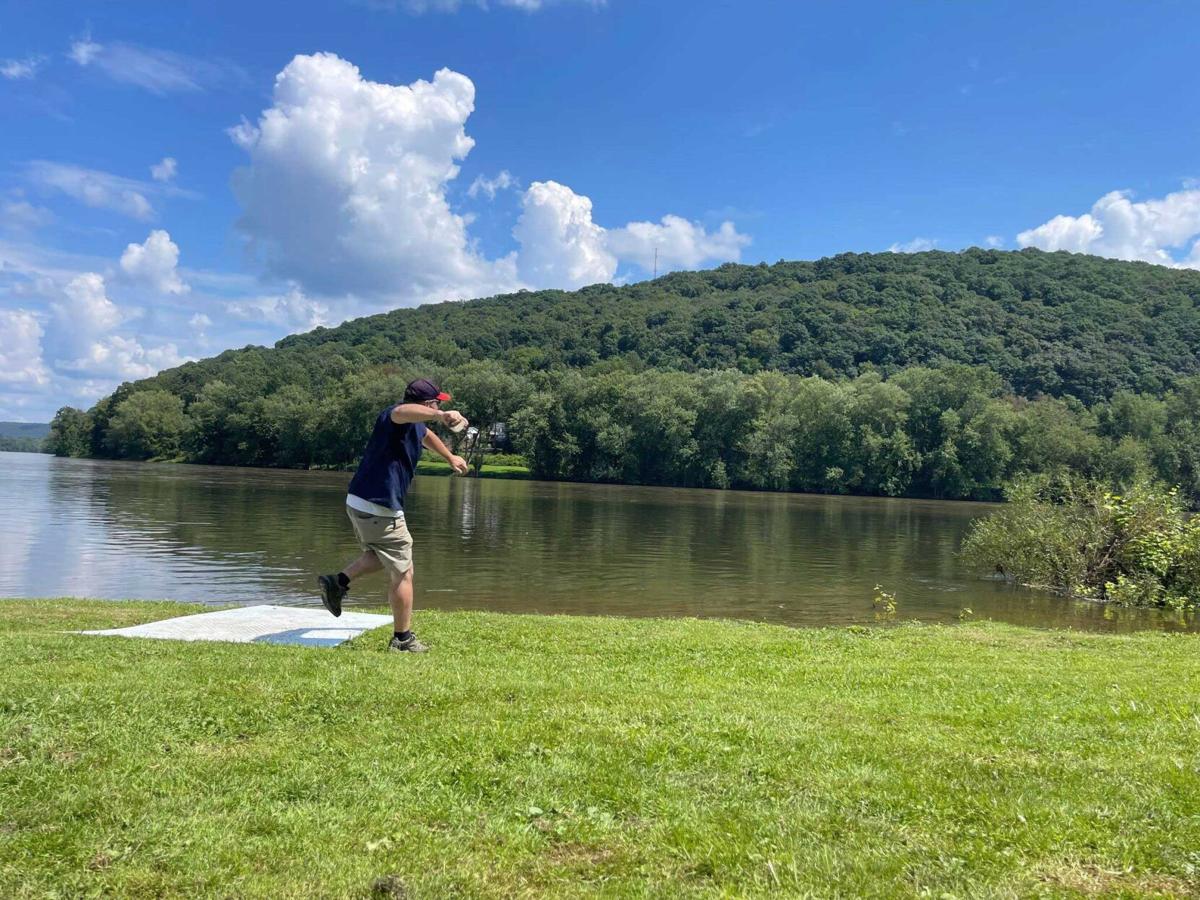 Brian Ferry, a former reporter with The Derrick and The News-Herald, has been participating in the Rock In River Festival for a decade. (By Stacey Gross) 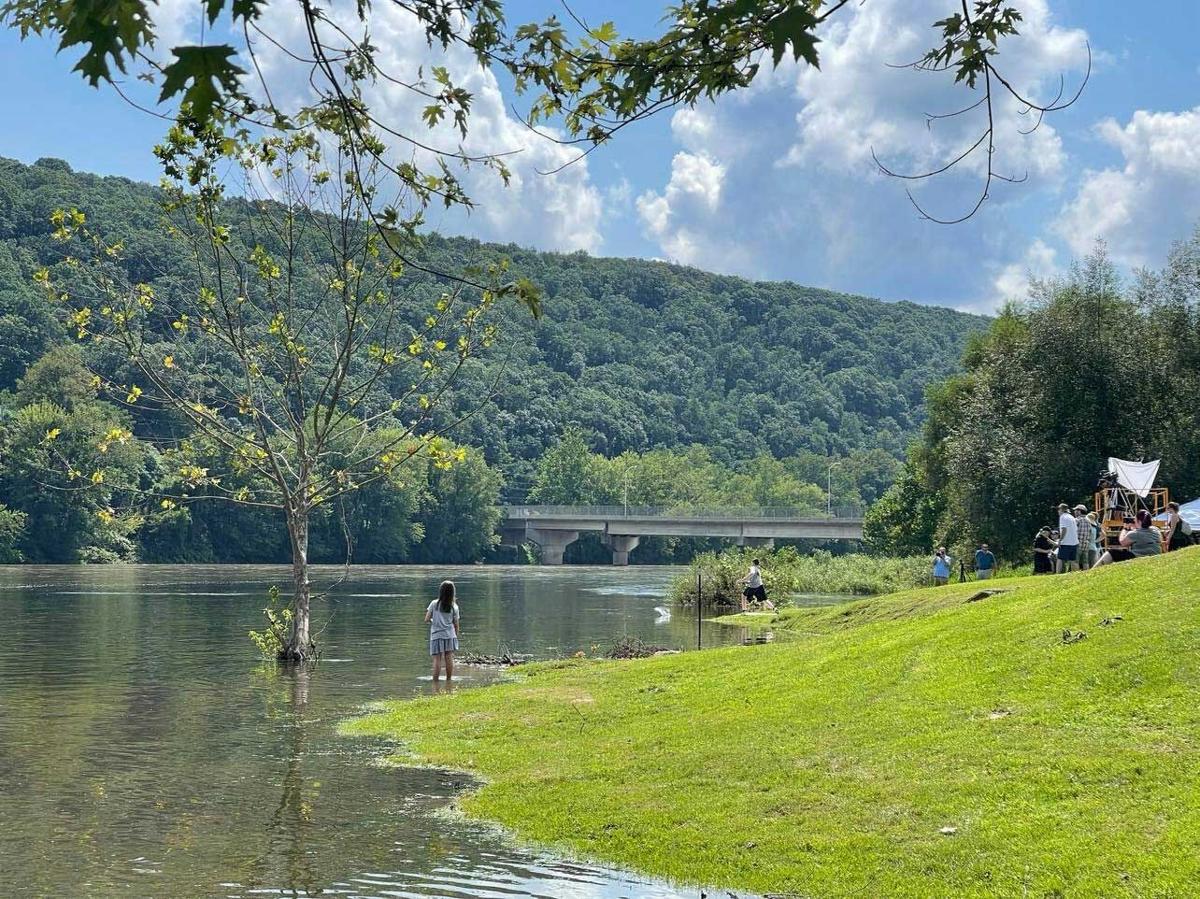 The Rock in River Festival offered a great way to cool down in the heat at Riverfront Park on Saturday. (By Stacey Gross)

Enzo Ferrari, of Baltimore, was among the professional stone-skippers at the Rock In River Festival on Saturday afternoon. (By Stacey Gross)

Clair Marie Persing, 13, Abby Wolfe, 12, and Zoe Wolfe, 9, all of Franklin, cool off with dogs Hailey and Lola at the Rock In River Festival on Saturday afternoon. (By Stacey Gross)

Brian Ferry, a former reporter with The Derrick and The News-Herald, has been participating in the Rock In River Festival for a decade. (By Stacey Gross)

The Rock in River Festival offered a great way to cool down in the heat at Riverfront Park on Saturday. (By Stacey Gross)

It was all about skips and stones on Saturday, as the Rock In River Festival returned to Franklin's Riverfront Park.

From youths to amateurs to professional stone-skippers, dozens took their shots from the bank of the Allegheny River, skipping hand-chosen rocks they'd brought with them from as far as Michigan and Kentucky.

According to Guinness world-record holder Kurt Steiner - who skipped one rock across the Allegheny Reservoir at Red Bridge 88 times in 2013 - "if you can win in Pennsylvania you can win anywhere."

The competition in Pennsylvania, according to Steiner, is steep.

Franklin's Rock In River Festival is one of the "big four" stone-skipping contests.

"This is a place to test yourself" against the best, Steiner said Saturday before heading off to practice skipping ahead of the professional competition and "get (his) head in the game."

"About anyone who can do well her in Pennsylvania is top class," he said. "There's a lot of good talent."

Former Derrick and News-Herald reporter Brian Ferry was on hand Saturday, as he has been for the past "at least 10 years," to compete in the professional class of stone-skippers.

Ferry said he's been a noncompetitive stone-skipper since the age of 4, when he'd go skipping stones with his father. Now, said Ferry, he's carried on that tradition with his own sons, Alex and Liam. Alex has competed, and even done well.

"I really like to encourage Alex," Steiner said. "That kid has a great arm."

Before heading north to live in Warren County, Ferry said he decided to give the competition a shot after hearing about it. A decade later, nothing has changed, mostly because he enjoys the annual event itself.

"It's 200 people here to watch people skip stones," Ferry said. "What's not to love about it?"

Furthermore, Ferry said, "you get involved, you make friends. These guys are great."

Although Ferry in the past racked up a respectable 38 skips, he said his hero in the game will always be his son Alex. "He's better than me and younger than I am." Alex's high mark, according to Ferry, is 42.

The contest has been open to youth contestants age 12 and under, as well as amateurs age 13 and up.

Amateur throwers can eke their way into the professional competition by throwing at least 30 skips in the amateur division. Those contestants threw six stones at a turn.

In fact, there were four competitors who qualified for the professional division on Saturday after their performances in the amateur division earlier in the day.

Professionals got three rounds of two throws each.

More than anything, most stone-skippers agree, it's the event and the memories that keep them coming back.

STACEY GROSS, reporter for The Derrick and The News-Herald, can be reached at staceygross.thederrick@gmail.com or (814) 676-7057.

In December 1985, Vickie Atkinson accepted the position of activities director at the former Grandview Healthcare on Grandview Road.

A Union soldier in a famous Civil War photo is likely buried in Oil City, where his descendants still live.