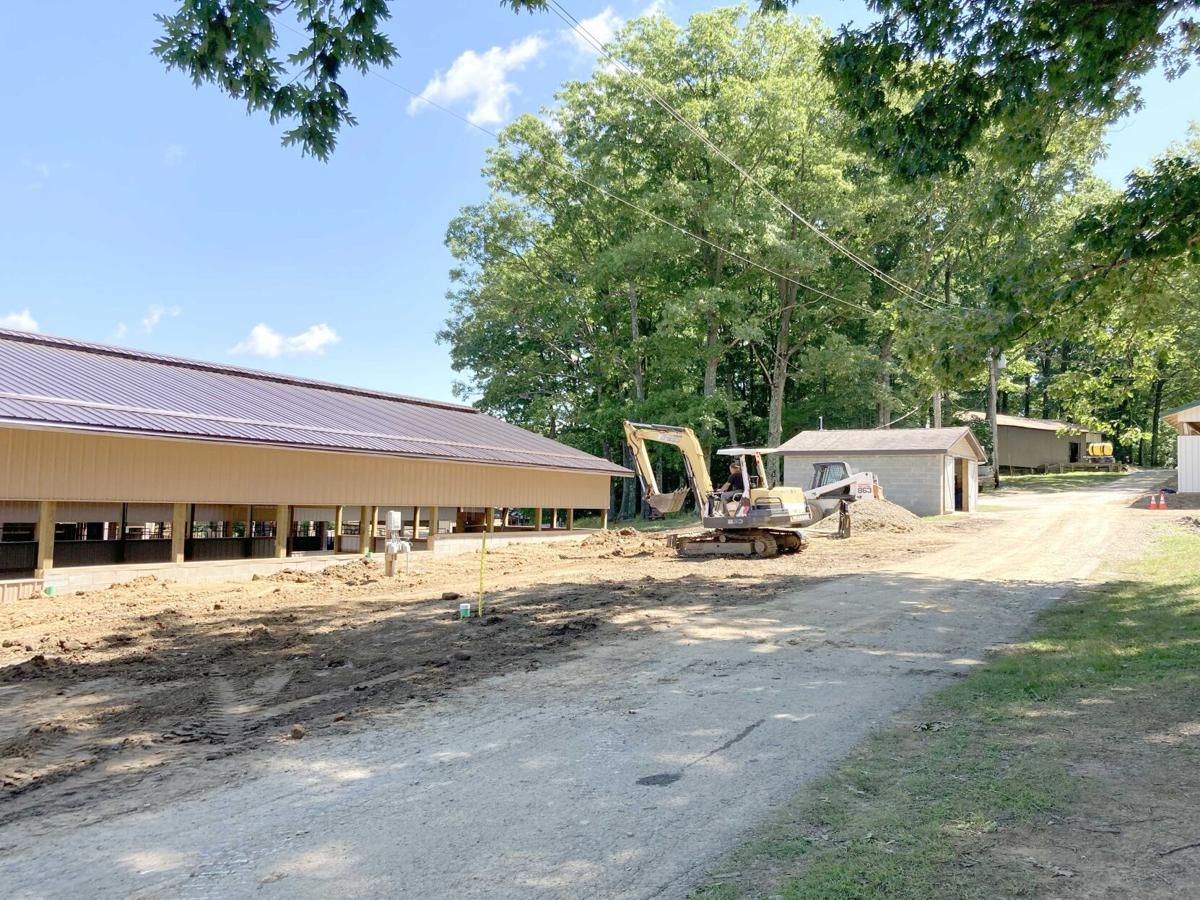 Construction takes place outside one of the new barns at the Venango County fairgrounds on Friday. (By Leandro Aristeguieta) 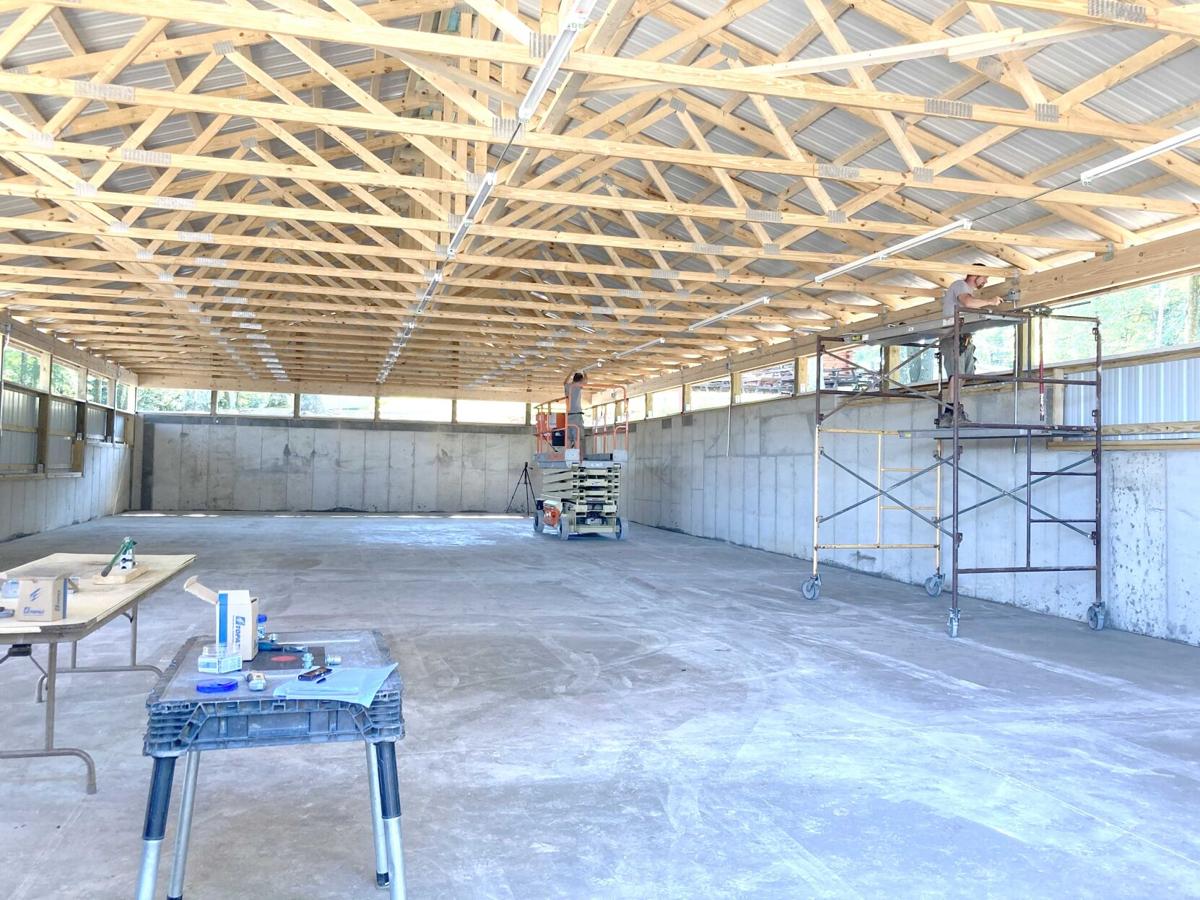 Two electricians work on the new rabbit and poultry barn at the Venango County Fairgrounds on Friday. (By Leandro Aristeguieta)

Construction takes place outside one of the new barns at the Venango County fairgrounds on Friday. (By Leandro Aristeguieta)

Two electricians work on the new rabbit and poultry barn at the Venango County Fairgrounds on Friday. (By Leandro Aristeguieta)

The Venango County Fairgrounds' facilities are modern structures built for longevity and ease of use. However, it wasn't always that way.

Chad Findlay, who has been involved with the Venango County Fair since the early 1980s, knows how far the fairgrounds have come. During his childhood, when his parents went to the fair to show their cattle, there were only a few buildings on the grounds.

"They had open show rings," said Findlay, who serves as Cranberry Township manager and previously served on the Venango County Fair Board for 14 years.

"There weren't many barns or buildings here. Volunteers would put up a lean-to structure and they would have open shows and 4-H shows for people in the county. Then they started building larger, more substantial buildings once they realized this was going to fly - that the fair was going to be here."

Though the community came together around that time to build up the fairgrounds, there was a problem with those first buildings: they weren't made to last.

"When you figure in the '70s and '80s when you scab together a building, it gets to a point where there's going to be end of life at some point in time. And we've experienced that here in the last 15 years," Findlay said.

There were many serious problems with these early structures, leading to a round of new construction at the fairgrounds, starting with the horse barn.

"Those buildings extended their life expectancy," Findlay said. "Unfortunately, that started about 15 years ago when we got a lot of complaints about the horse barn, which is what started the drive to replace a lot of buildings."

Many of the old buildings were simply unsafe for humans and animals alike, he said.

"It got to a point (it wasn't) safe to be in the horse barns," said Brad Deeter, president of the Fair Board and Findlay's brother-in-law.

There was a sense of urgency from Fair Board members to ensure the fairground's facilities would be usable for future generations, Findlay said.

"I would say at least a dozen of us on the board were in our 20s or younger. We knew our kids were going to be around here and we wanted something that was going to last," he said.

From that point, the Fair Board has strived to upgrade its facilities. Throughout the last 15 years, much has been changed and updated.

This year, there have been five new structures built at the fairgrounds.

Two barns were built - the first to house rabbits and poultry; the second for goats and sheep, built close to Phillips Arena.

"We didn't really have a building for goats and sheep," Findlay said. "We put them in horse pens last year, but that's not what horse pens are built for."

Deeter said dairy cows, beef cows and pigs were "all situated, but we didn't have a place for sheep and goats. They were kind of thrown in three or four different barns. We felt we needed to get them in one central location."

The advantage of the new goat and sheep barn is its roof connection to the show and sell ring in Phillips Arena.

That was a goal the fair had strived for and finally accomplished, Findlay said.

"People probably don't appreciate the fact that all these facilities are now connected by roof," Findlay said. "All of these sheep and all these goats and pigs can be brought in by a connecting roof."

He said the connected roof shields spectators from rain and animals from the heat.

"There's not many county fairs you're going to find that have these facilities," Findlay said. "It's something that we put a lot of effort into."

The rabbit and poultry barn is not connected by roof because those animals are shown inside their barn, Findlay said.

Planning for the future also has allowed for the new construction to be easy to maintain.

"It would be hard for a lot of people to understand how easy things are now compared to what they used to be," Findlay said. "Knowing that we have young kids, planning ahead, we didn't want to have everyone else go through those things we've been inconvenienced by in the past."

Improvements also were made to electrical infrastructure.

To house all the breakers, panels and other electrical hardware, a small building behind the main office was constructed. Inside the building are all four of the electrical services for the fairgrounds.

This project will continue for the next couple of years, as Capital Improvements grants will be sought from the state to upgrade each electrical service.

"We have the power coming into the fairgrounds, but all of our stuff is old and corroded so you lose power," Deeter said.

In addition, a new pavilion was constructed next to the youth playground.

"If people want to have a birthday party or a family reunion, they can come in and use it," Deeter said.

Along with the buildings built by the Fair Board, the Scrubgrass Grange has constructed a permanent site on the grounds.

Findlay and Deeter said the grange has been extremely helpful to the fair since its inception. The grange previously built a building on the grounds and had helped with a couple of others.

"They used to every year pull in with a a big, long portable trailer and sell food," Deeter said. "Now they built this building themselves here."

Both Findlay and Deeter were in agreement as to why they continue to help take care of the fairgrounds.