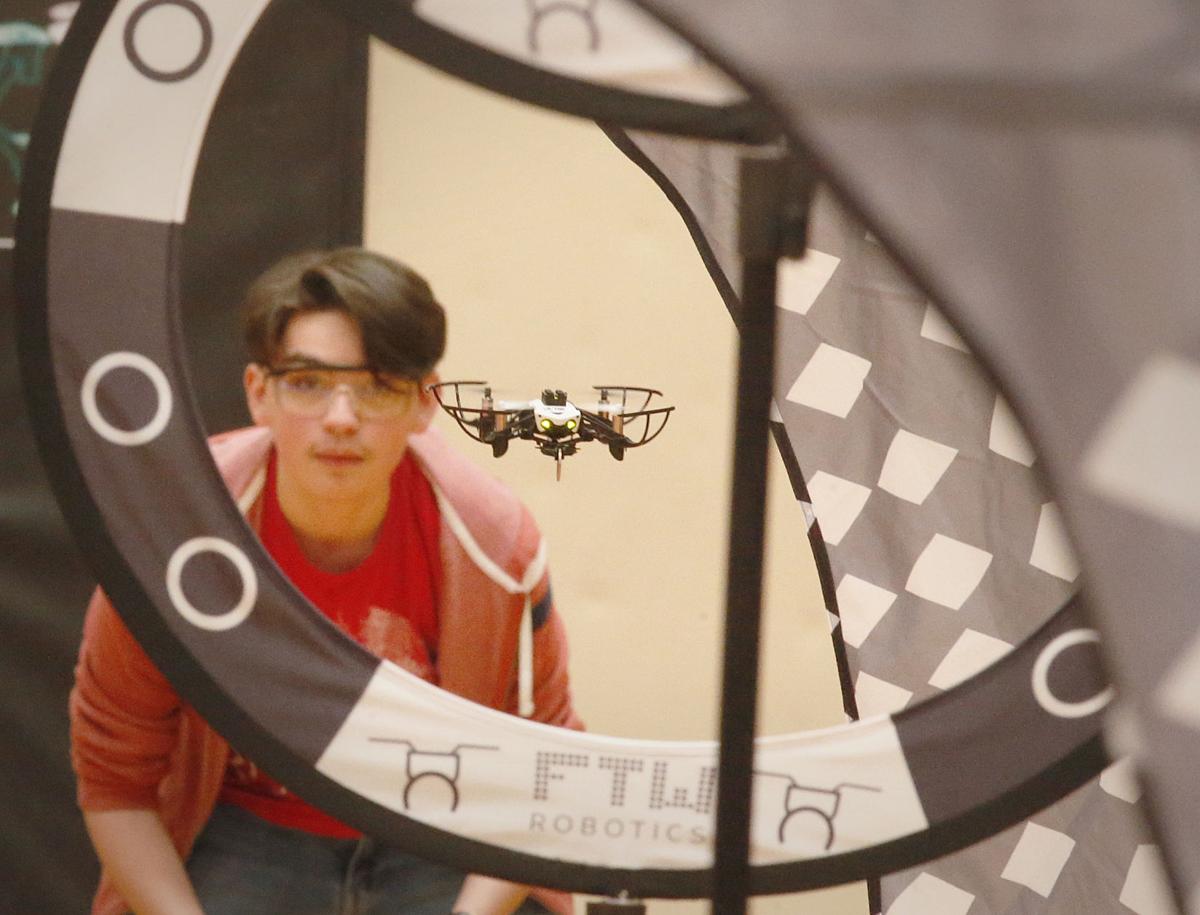 Franklin High School sophomore Dylan Crum concentrates intently on his drone as he drives it through the speed course in the school gymnasium. (By Richard Sayer) 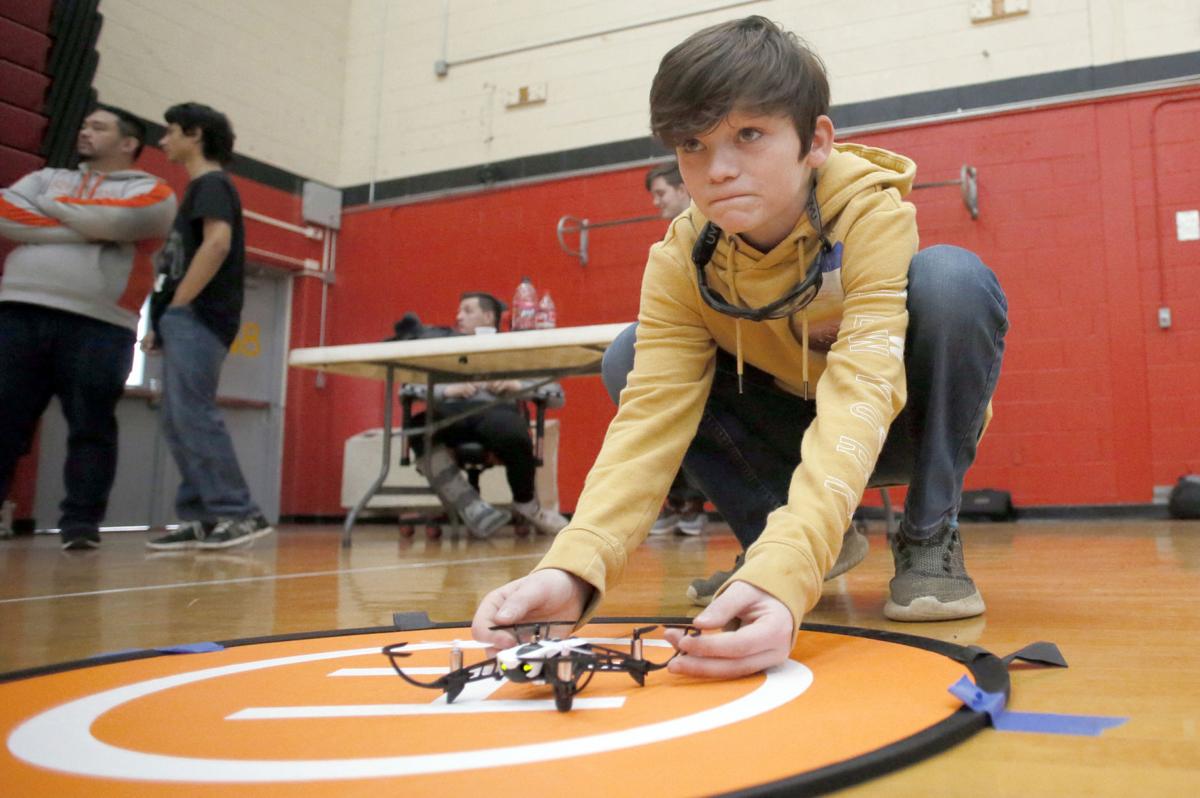 Eighth grader James Morrison looks at aiming his drone on the package delivery course that is navigated by coding the drone to perform a set task without someone manually driving the apparatus. (By Richard Sayer) 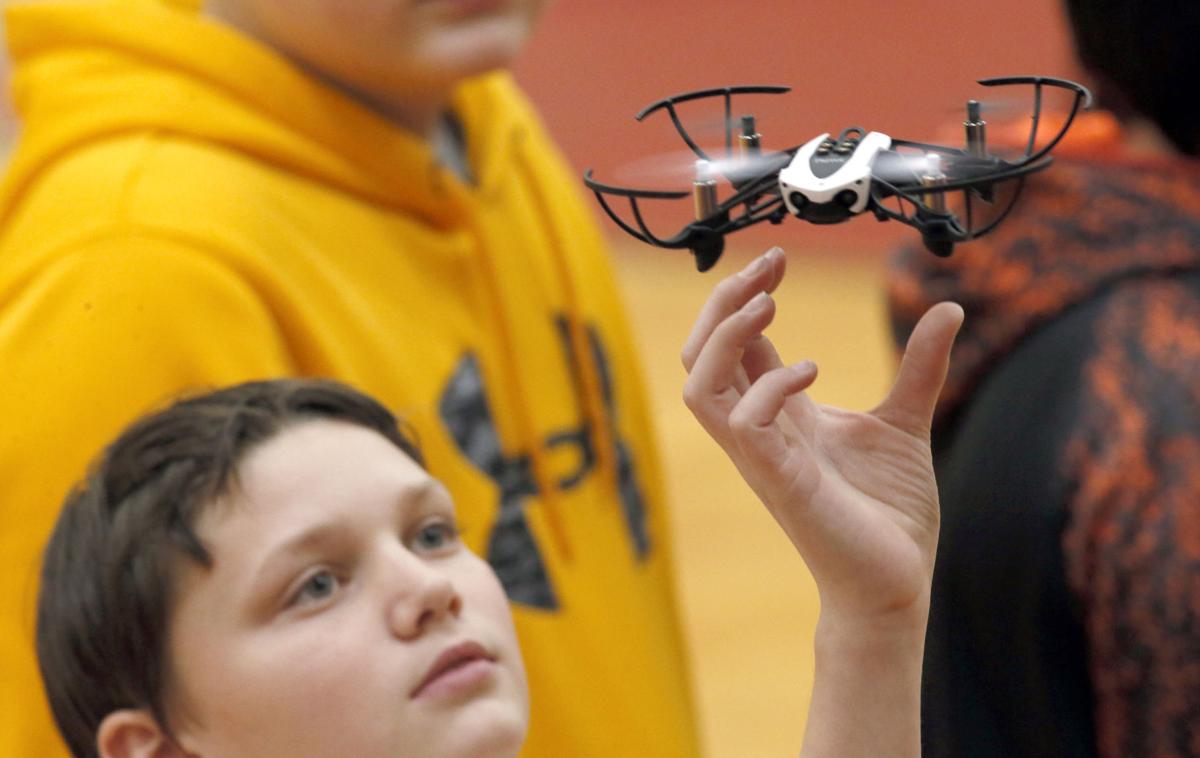 Seventh-grader Eddie Walter said the drone wasn't responding to its controller, so he went to pluck it out of the air to see what needed to be fixed. (By Richard Sayer)

Franklin High School sophomore Dylan Crum concentrates intently on his drone as he drives it through the speed course in the school gymnasium. (By Richard Sayer)

Eighth grader James Morrison looks at aiming his drone on the package delivery course that is navigated by coding the drone to perform a set task without someone manually driving the apparatus. (By Richard Sayer)

Seventh-grader Eddie Walter said the drone wasn't responding to its controller, so he went to pluck it out of the air to see what needed to be fixed. (By Richard Sayer)

What does racing drones have to do with education?

That was a question on the minds of many adults who walked into the Franklin High School gymnasium Thursday to find the space transformed into something that could be found on an obscure sports channel broadcast over daytime television.

Sounds coming from the gym wouldn't have led anyone to believe anything was amiss. The cheering of a crowd, teammates calling out to one another with directions and encouragement, and the sound of coaches teaching their students new techniques and skills all still bounced off the walls, but getting closer, the some more common sounds were absent.

Squeaking sneakers and the smack of a ball were instead replaced with a whiz-hum that drifted on the air like a very large bee and turning the corner, onlookers were greeted with the sight of small drones as they darted up, down and around a course of arches and rings, similar to a Quidditch pitch from Harry Potter.

"It's exciting, isn't it," Franklin Industrial and Commercial Development Authority executive director Deb Eckelberger asked as she gestured to the course outlined in an iridescent blue rope light.

Eckelberger was serving as a judge for the drone race, officially called the RAD Aerial Drone Competition, which rolled out to schools through a partnership of For the Win Robotics (FTW) and the Robotics Education and Competition (REC) Foundation the minds behind the VEX Robotics competitions.

Thursday's event was just the 15th of its kind to be held in the nation and was well received with almost 50 Franklin students on the roster that competed in teams of three.

Jim Crane, director of strategic initiatives for the REC Foundation, said the competition has "blown up" over the last year with more than 300 teams already registered across North America, Dubai and Europe.

For now, the competition solely consists of teams of three racing the drones through an obstacle course, but Crane said larger things are to come.

The driver pilots the drone while the other two team members, called spotters, help the driver get through the course by calling out directions when the driver can't see.

"I really like that there's a sense of teamwork," Crane said of RAD.

Coming from a team-oriented competition like VEX, Crane said he was worried it would be hard to engage the students who weren't driving the drones.

"I thought everyone was going to want to fly the drones and spotters wouldn't be engaged (in the competition) but it's actually been the opposite. (The spotters') role is really important and they recognize that," Crane said.

Jodi Baker-Lewis, executive director of the Franklin Area Chamber of Commerce, which sponsored the RAD competition, said teamwork is coming together with skills the students are already learning to create a perfect storm of workforce ready students.

Crane said next year RAD will feature skills that are more traditionally thought to be academic when a coding aspect is introduced into the competition.

As is common with the Franklin robotics program, students were ahead of even this curve and went ahead with that part of the competition as well. Students worked separately from the racecourse to program their drones to fly through a ring and drop a package without being controlled by a driveror autonomously.

Despite robotics becoming more accepted into the lives and curriculum of students, there are still those who ask why something like this should be held during a school day when students could be in the classroom learning, but Lewis waved the notion away.

"Learning from whose perspective," Lewis asked. "The traditional learning from books, or learning outside of the box."

Eckelberger said schools that are giving their students opportunities such as RAD or VEX are tapping a "pipeline to fill workforce needs."

Both women agreed it's the "soft skills" like teamwork and communication that the students are developing that might be the most influential.

"I have kids here that will never be on a sports team," said Tim Heffernan, Franklin's technology instructor.

Heffernan said these types of programs are affording teamwork and problem solving opportunities - similar to situations a student would work through in sports - to students who may never set foot on a field or court.

"This is the beginning of something big," Heffernan said.

"Hey, we're doing professional work here," student Lane Harrah said when asked why he was playing around with a drone when he should be learning.

Harrah and Elijah Pfeuffer, both freshmen who served on the day's winning team - Harrah as a spotter and Pfeuffer as driver - said soft skills were the main focus of the day, but engineering also played a big role when a drone crashed and needed to be put back together.

"The main focus was on teamwork though," Pfeuffer said.