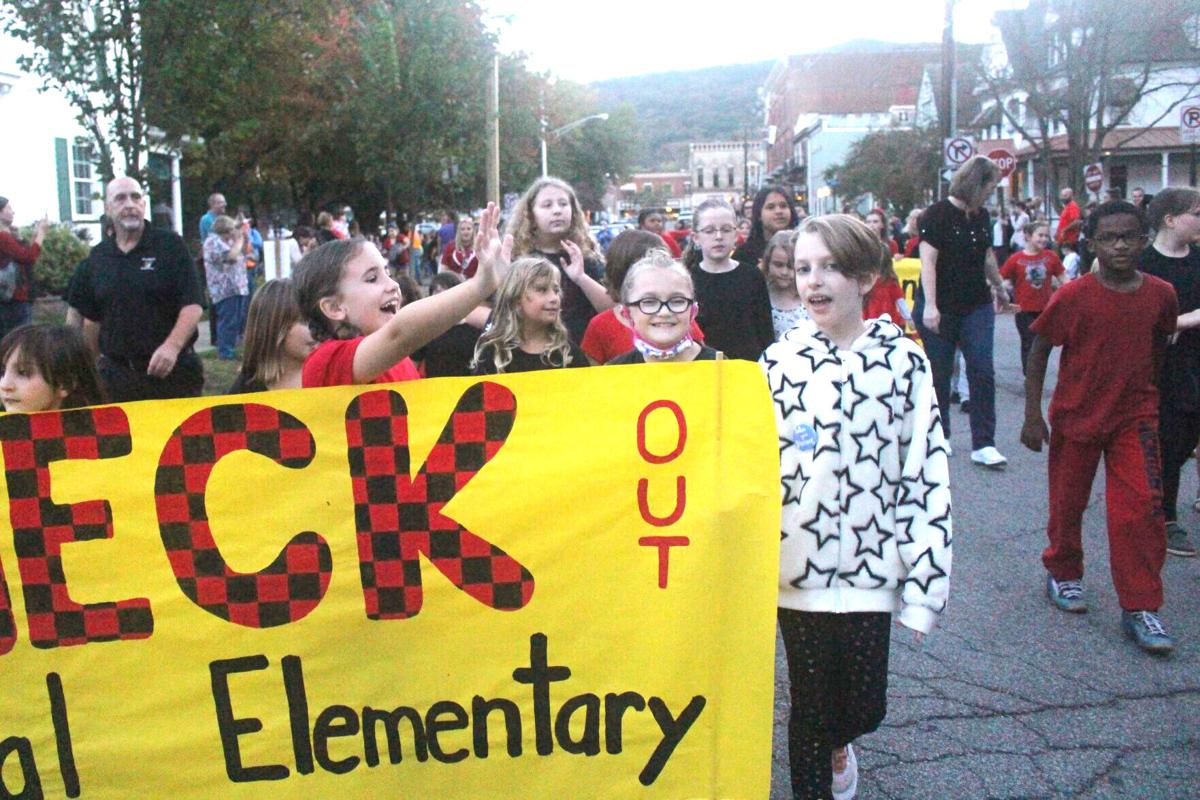 Central Elementary Students waive as they parade down West Park Street toward their school on Wednesday. 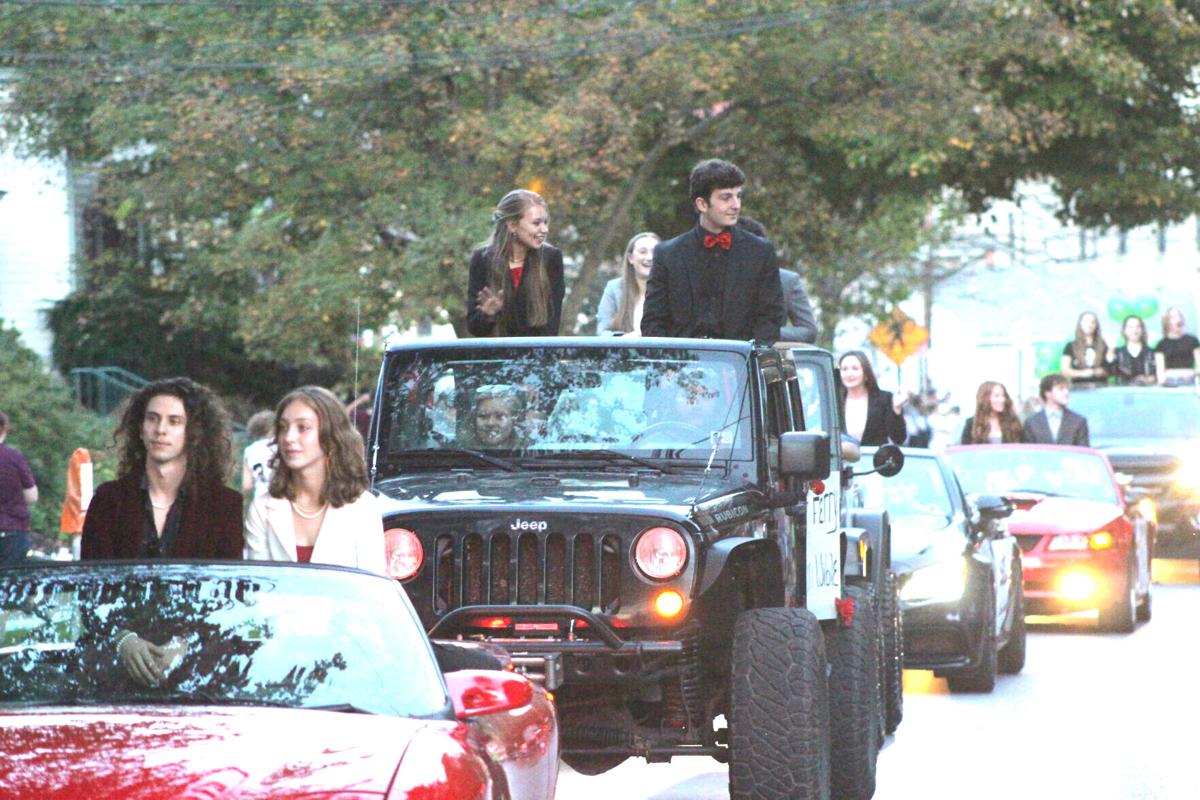 Franklin homecoming queen candidates and their escorts parade down Elk Street in Franklin on Wednesday. 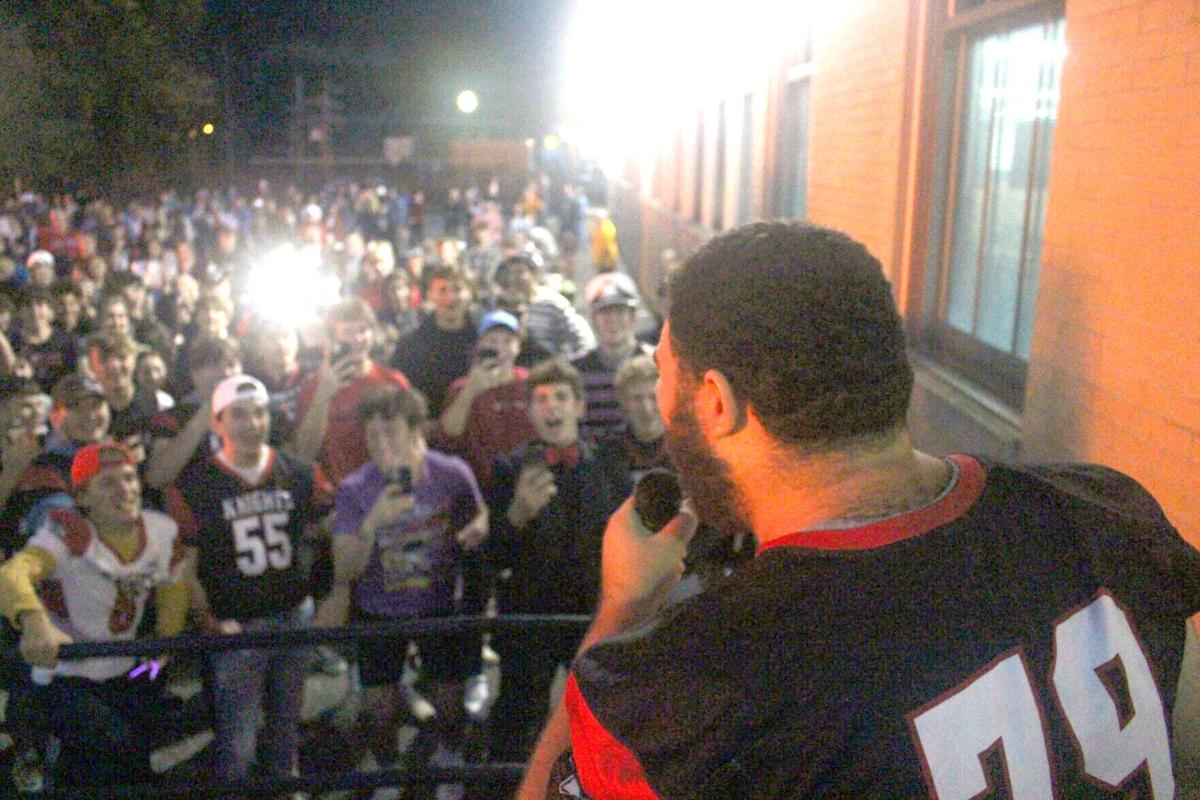 Donovan Fike, a senior Franklin football player, hypes up the crowd at a pep rally at Central Elementary following the homecoming parade, Wednesday. 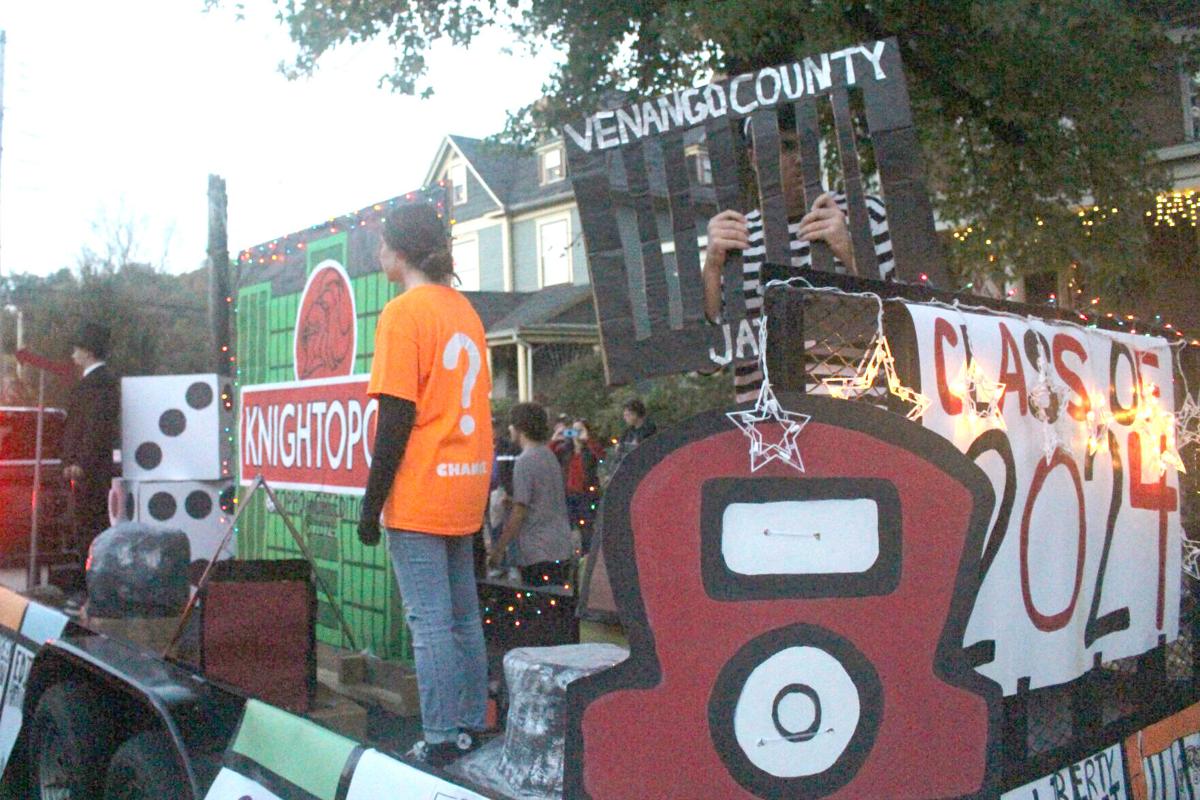 Central Elementary Students waive as they parade down West Park Street toward their school on Wednesday.

Franklin homecoming queen candidates and their escorts parade down Elk Street in Franklin on Wednesday.

Donovan Fike, a senior Franklin football player, hypes up the crowd at a pep rally at Central Elementary following the homecoming parade, Wednesday.

A crowd stretched several blocks as they watched the students pass by in their game night themed floats.

“I was happy to see this many people tonight,” said Victory Elementary principal K.C. Miller.

A pep rally and bonfire helped ignite the Knights’ football team for their homecoming game Friday night against General McLane.

“We wanted to get them back downtown,” said Gustafson, who planned the event. “With this year we wanted to return it back here for prominence, after we weren’t able to hold anything last year.”

The Pennsylvania Department of Transportation said it has lifted the 45-mph speed restriction on Interstate 80 in Venango and Mercer counties, which was prompted by the winter weather late this afternoon and early evening.

CLARION — What’s black and white and red all over?

Hunters take to the woods for opening of deer season

Hunters were busy Friday as they headed to their camps, staked out their favorite spots and bought the supplies they need for today’s first day of firearms deer season.

Many of the wooded hillsides of Venango County still tell the story of the oil boom in the form of large wooden barrels and rusted pumping equipment.

In-person programming is still going on at local libraries, with both ongoing programs and changing offerings for school-aged youth.

HARRISBURG — Acting state Secretary of Health Alison Beam over the weekend announced all adults in Pennsylvania are eligible to schedule a COVID-19 vaccine booster.

It wasn’t easy, but it was historic.

The anticipation of the Christmas season was in the air Thursday afternoon as trees went up in the Barrow-Civic Theatre in Franklin.

CLARION — Clarion County leaders gathered Monday to discuss the dwindling number of ambulance personnel and services in the county, especially in rural areas.

In times of disaster, local lineman ready to hit the road

Eric Tritten was in Louisiana this fall, helping restore power to the state after Hurricane Ida ripped through, 16 years after Katrina.

Although the price of meat has substantially gone up during the national supply-chain problem, local businesses that sell beef, pork and poultry tell the newspaper that consumption hasn't gone down.

During the most recent meeting of Leadership Venango, a group organized by the Venango Area Chamber of Commerce to help local professionals hone their leadership skills, the group focused on communication and project management skills.

Colleagues and family of Glen Mohnkern, a lifelong Oil City resident and longtime managing editor at The Derrick who died last year, have spent the last several months discussing how they could best honor his memory and legacy in the community he loved.

The Oil City Area School District announced on its website that the high school and middle school will teach remotely on Wednesday and Thursday.

Operating any school during the COVID-19 pandemic has been a challenge, but running a vocational school has presented even more obstacles.

A new train mural is coming to Oil City.

Keystone rolls to 2A crown; Clarion dominates in 1A

FOXBURG — For the first time in almost 30 years, Keystone’s girls volleyball team can call itself champions.

Portion of Route 322 closed due to crash

A portion of Route 322 is closed due to a two-vehicle crash that occurred this morning in Shippenville.

Cranberry schools 'thinking outside the box' to keep students fed

As labor, transportation and food shortages spread across the country, local schools are adjusting to keep their students fed.

In Remembrance: Remembering Those We Lost in October

Panthers have fun in mud

WEST SUNBURY — Five minutes into Friday night’s District 9 Football League crossover contest between Keystone and homestanding Moniteau, the players’ numbers were barely visible due to the mud and chewed up turf that resulted from a nearly all-day rain.

A Dubbs Street home in Franklin was destroyed by fire Wednesday, and an adjacent house was moderately damaged.

Route 308 in Venango County has reopened after being shut down this morning as a result of a crash involving an overheight vehicle and downed utility lines, according to the Pennsylvania Department of Transportation.

With Thanksgiving and the holidays approaching, the American Red Cross urges donors to continue to make and keep appointments now and in the weeks ahead to help overcome the ongoing emergency blood and platelet shortage that has significantly impacted the nation’s blood supply.

CLARION — The new Penn Highlands Healthcare Medical Building in Clarion officially opened Monday, and the $6.5 million facility near the Clarion Mall offers a wide range of services to area residents.

The Franklin Area School District announced the junior-senior high school will be closed from Tuesday through Friday because of a significant rise in student and staff cases of COVID-19.

The two-year, $32.6 million project to repair and reconstruct nearly 10 miles of Route 8 from Georgetown Road (Route 3004) in Irwin Township to Polk Cutoff Road (Route 3024) in Sandycreek Township is nearly complete.

SLIGO — While cleaning out a garage in Clarion County, Don Keene, who operates a scrap metal business in Sligo, came across a large, old trunk filled with artwork and notebooks spanning the life and artistic development of a woman who called Oil City home.

Grow with Us! Community Services of Venango County, Inc., (www.csvenango.com)

Grow with Us! Community Services of Venango County, Inc.,…