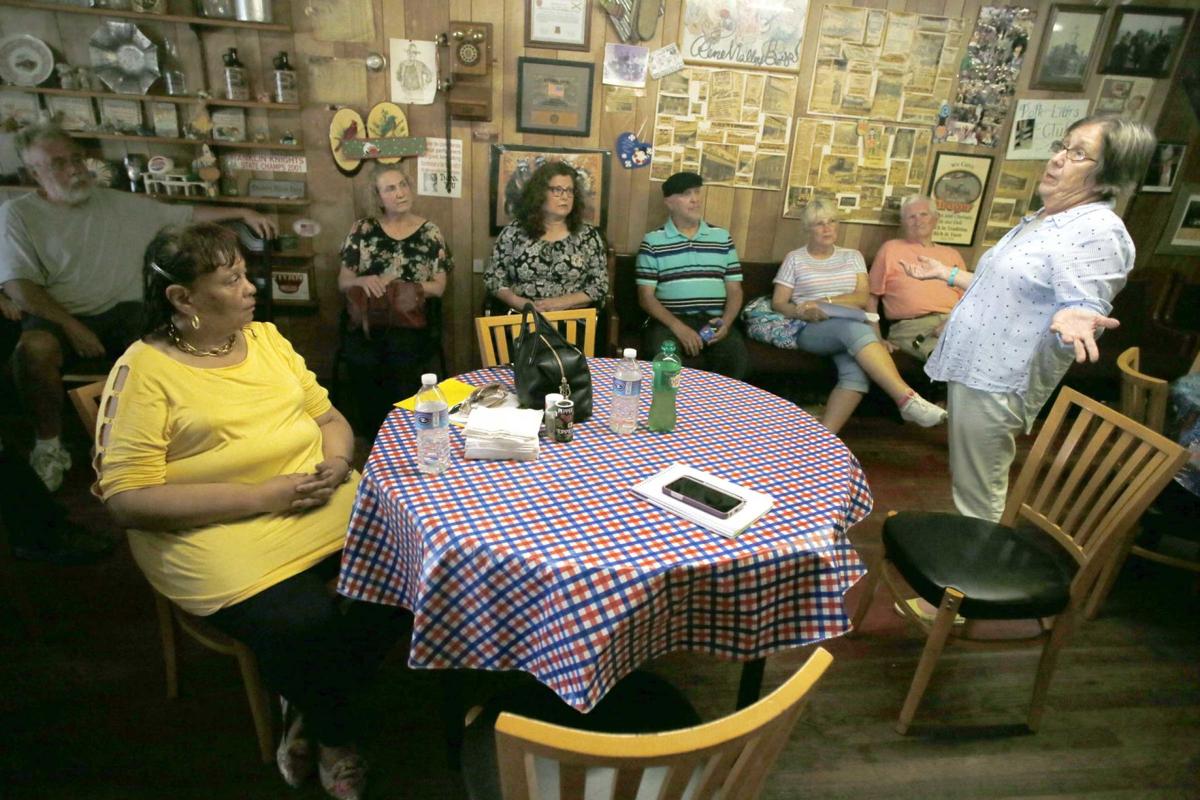 Irene McCabe, whose sister has been living at Polk Center since she was a little girl, talks to a group of about 20 family members and community officials at the Main Street Market in Polk on Tuesday. The gathering at the market followed a meeting with families at Polk Center.(By Richard Sayer) 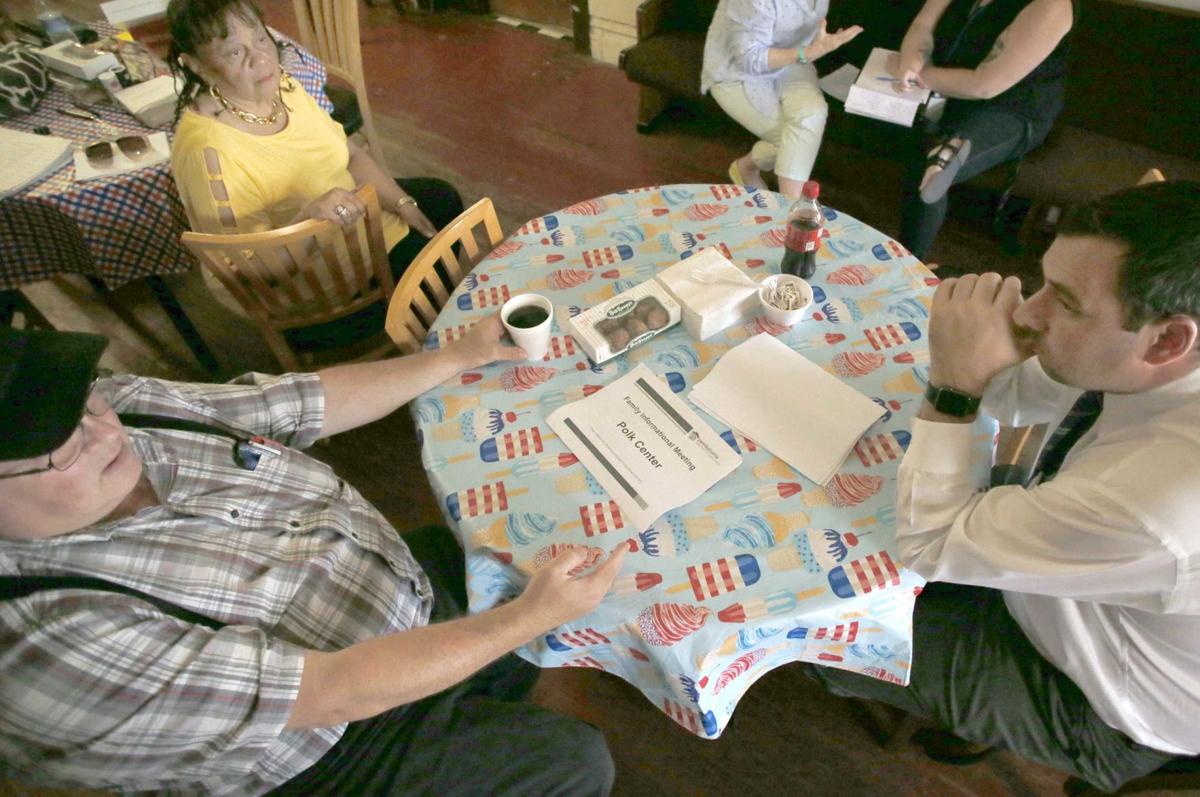 Venango County Commissioner Albert Abramovic attended the meeting at Polk Center on Tuesday, then stopped by the Main Street Market to talk with Jim Miller, the market owner and Polk Borough Council president; and Beverly Evans, who has a son who has lived at Polk since he was 15. (By Richard Sayer) 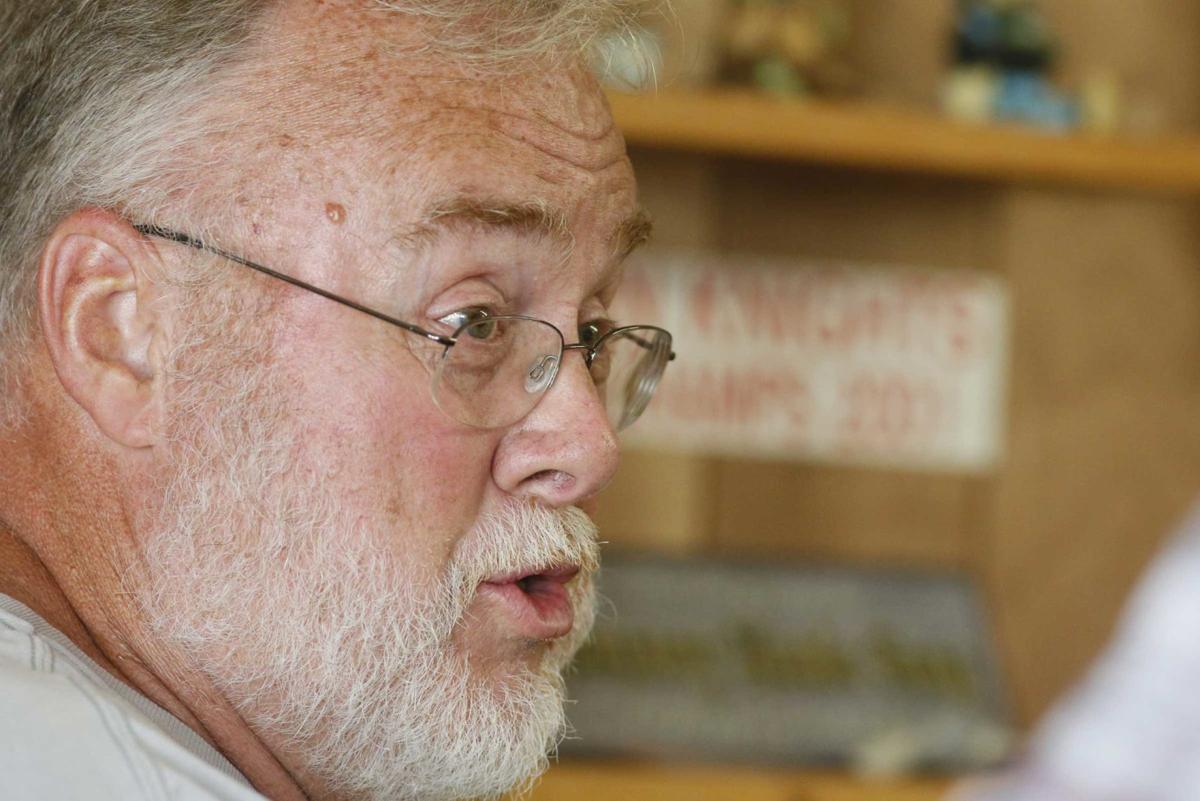 Polk Borough Mayor Dave Owens said he was a 30-year employee at Polk Center, and he said Tuesday he doesn't think it is a good idea to close the center. (By Richard Sayer) 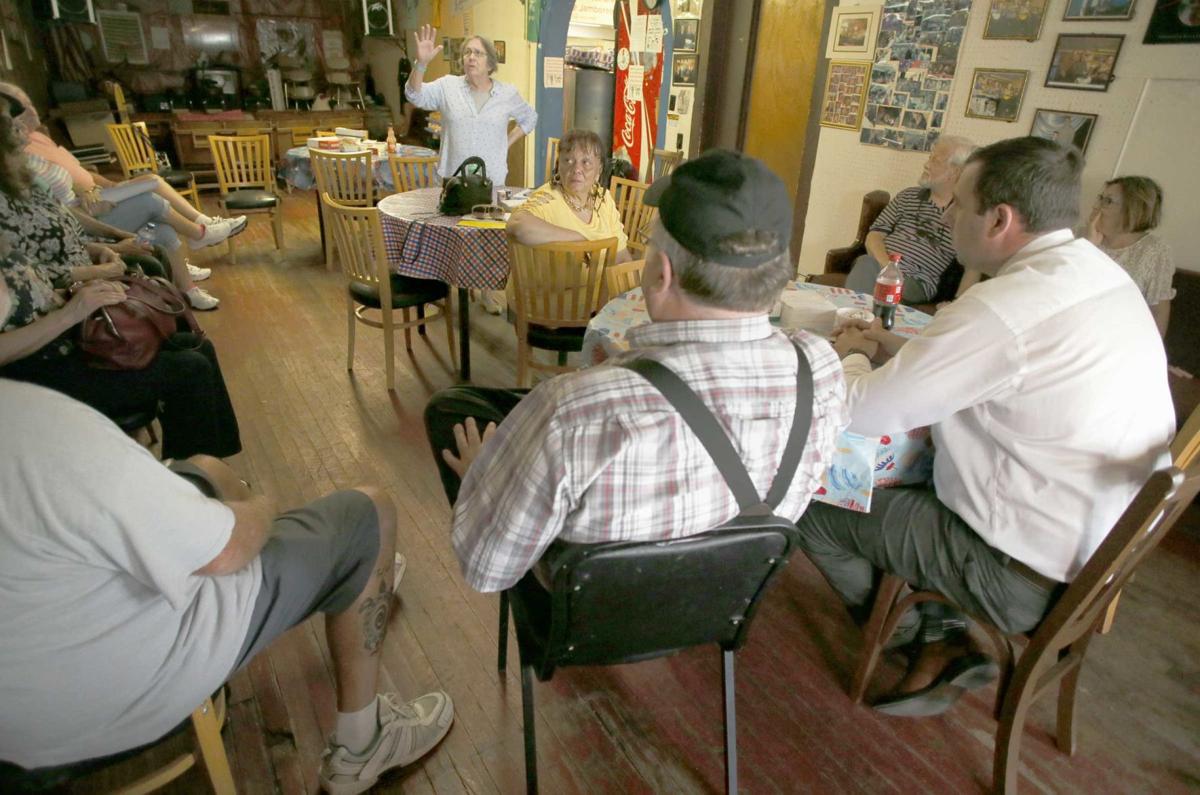 Irene McCabe, whose sister has been living at Polk Center since she was a little girl, talks to a group of about 20 family members and community officials at the Main Street Market in Polk on Tuesday. The gathering at the market followed a meeting with families at Polk Center.(By Richard Sayer)

Venango County Commissioner Albert Abramovic attended the meeting at Polk Center on Tuesday, then stopped by the Main Street Market to talk with Jim Miller, the market owner and Polk Borough Council president; and Beverly Evans, who has a son who has lived at Polk since he was 15. (By Richard Sayer)

Polk Borough Mayor Dave Owens said he was a 30-year employee at Polk Center, and he said Tuesday he doesn't think it is a good idea to close the center. (By Richard Sayer)

Close to 20 families of Polk Center residents filled the side room of Main Street Market in Polk Borough on Tuesday to air their grievances following last week's stunning news the facility will close over a three-year period.

The informal gathering at the market was designed to be a forum for families and caregivers to discuss a plan of action moving forward.

Earlier in the day, about 150 family members attended a three-hour meeting at Polk Center where Kevin Dressler, the director of the state's Bureau of State Operated Facilities, explained the "transition process" for closing the center.

"There wasn't an elected official in Venango County that knew about it more than 15 minutes before they made the announcement," Jim Miller, the Polk Borough Council president and owner of the Main Street Market, said.

"We all feel like we've been blindsided," added Pam Dougherty, of McKean, whose brother has lived at Polk Center for 70 years.

The facility has provided homes for thousands of individuals with intellectual and developmental disabilities since it opened in 1897. Currently, there are nearly 200 residents and about 750 employees there.

While a closure had been bandied around for years, most recently in a state House bill introduced in 2017 as a means to save money, the unexpected announcement one week ago today by the Pennsylvania Department of Human services was made without advance notice.

Teresa Miller, the Department of Human Services secretary, said last week the move to shut down Polk and White Haven, two of the four similar institutions in the state, was prompted by a reflection of Gov. Tom Wolf's efforts to "serve more people in the community, reduce reliance on institutional care and improve access to home- and community-based services so every Pennsylvanian can live an everyday life."

Meanwhile, all those at Tuesday's meeting at the market said they feel the announcement to close the facility was handled poorly.

"It can't be money," added Polk Mayor Dave Owens, who is retired from Polk Center.

Owens said that while he'd been at the center "they spent $50,000 on each of (a building's) bathrooms and turned around and closed it."

For her part, McCabe believes the planned closure to be purely political.

"The whole thing is very aggressive, it was like a one-two punch," she said.

McCabe said she believes the announcement of the closure has less to do with money, or wishing to see residents live better lives, and more to do with cutting off a larger national movement to prevent these institutions from closing before it can "pick up steam."

"It's an aggressive move to cut the discussion short," she said.

It is a 'community'

A main topic of discussion during the meeting revolved around what could have happened to make this transition better for residents, guardians and employees.

Jim Miller said he wished that parts of the center that are not in use could be rented or sold to other entities to begin an almost incubator-like process of transition from care home to whatever the campus' new capacity would be.

Jim Miller also said that while he is focused on the business aspect of Polk Center's closure, noting that he has "a terrific lunch business because of the state," he is more concerned about the residents of the center.

"They are part of our community, there's no two ways about it," Jim Miller said.

The room constantly swirled with the same question phrased in different ways - What is the state talking about when it says residents need to be in communities when they already live in one?

Jim Miller said it's impossible to go anywhere in the small community without running into a center resident, adding that most residents have ample opportunity to leave campus through center sponsored activities like going to Franklin to hear concerts or watch shows, or even taking a trip to Kennywood in Pittsburgh.

Owens said that at one time in his tenure, residents were offered a trip to Disney World that employees would take them on.

"What group home is going to be nicer than right here," Miller asked.

What's in a name

At one point in the meeting, Venango County Commissioner Albert Abramovic pointed out that many present had used the words "group home, institution and center" in place of one another and asked if the group could start calling the center "Polk Group Home."

"So this whole thing (closure of Polk Center) is about a word," one person asked, to which Abramovic said he believed to be so.

McCabe shared the sentiment in idea but not name, saying she likes the name institution because it incites order and routine, but said she does see the stigma surrounding the word and Polk Center itself.

She urged people to open their minds and look at what the center really is as opposed to what it was.

Jim Miller, who said he remembers the time when the center housed thousands of residents, agreed.

"Back then probably about 90% of the people didn't need to be there, but now it's like a pendulum, it's swung from one extreme to the other," he said.

McCabe said her organization is currently focusing on gathering "taste test cases" to present to an attorney so an injunction can be filed.

"We need 12 solid cases, ones that are really vulnerable and show that any movement away from Polk would be dangerous," McCabe told the crowd.

McCabe said an injunction filed in Chicago recently kept an institution open for three years, long enough for new legislation to be written and the institution to be saved.

"We will need your commitment," McCabe said.

Abramovic said that if an injunction is filed, a period of discovery could shed light on the state's actual motive for the closing.

McCabe urged those assembled to remember they are not alone in the situation.

"There are hundreds, thousands of you out here," she said.

HARRISBURG - The state Department of Health announced the tri-county area reported 134 new cases of COVID-19 over the past week.

Responding to a call about a bear perched in a tree and then getting in position to tranquilize the animal in order to safely bring it down is all in a day's work for state game wardens.

Generations of talented musicians have been nurtured

The Schubert Musical and Literary Club of Oil City celebrated its 125th year of music Monday with a dinner followed by a special program.

State to lift mitigation orders, except masking, on Memorial Day

HARRISBURG — The Wolf administration, in coordination with the COVID-19 Vaccine Joint Task Force, announced today that mitigation orders, except masking, will be lifted on Memorial Day.

A Connecticut rabbi and his wife earlier this year took what they call a "Tour to the Wonderful." That tour brought them into contact with the Clarion County United Way.

Franklin state police said they are searching for a man accused of violating a protection from abuse (PFA) order and simple assault in an incident that occurred in the 200 block of Mason Street in Rockland Township.

CLARION — Clarion state police said they are searching for a missing Dayton, Pa., man who is endangered.

Cold day on the track

Three Franklin High School athletes recorded first-place finishes on the track Friday in the Oil Country Track and Field Invitational. Taking firsts for the Knights were Cade Adams and Magnum Vincent in the boys portion and Nadalie Latchaw in the girls.

In Remembrance: Remembering Those We Lost in April

CLARION - More than 50 services, educational organizations and potential employers filled the Clarion Mall on Wednesday for an employment and education fair.

Work underway to get OC pool back up and running

Preparations are underway to open the municipal swimming pool at Hasson Park in Oil City this year.

HARRISBURG - The state Department of Health announced the tri-county area reported 121 new cases of COVID-19 and Clarion County reported one new virus-related death over the past week.

A Clintonville volunteer firefighter was seriously injured Thursday when he was struck by a dump truck near the scene of an earlier pileup on the Emlenton Bridge that involved about a dozen vehicles.

Both lanes of I-80 reopen

The Pennsylvania Department of Transportation said both the westbound and eastbound lanes of Interstate 80 in the Emlenton area are now open.

Steve Ward, a 1969 graduate of Cranberry High School, was honored recently for his 50 years of service as a PIAA official in the gymnasium at Moniteau High School where ironically, he officiated his first-ever varsity basketball game in the late 1970s.

If first impressions mean anything, Two Mile Run County Park made a lasting one with a Pittsburgh-area couple over the past couple of days.

The faith-based Together We Can coalition, which organized several events last year in Venango County that raised local awareness of social justice issues, now wants to hear from high school seniors.

HARRISBURG - The state Department of Health announced the tri-county area reported 109 new cases of COVID-19 and two additional virus-related deaths over the past week.

Preparations for next month's primary election are underway in Venango County, and all the county's voting machines are being tested this week to make sure they are working properly.

HARRISBURG — The state Department of Health today said it notified COVID-19 vaccine providers that the pause in administering doses of the Johnson & Johnson (Janssen) vaccine will be extended until April 24, or until updated guidance is provided from the Centers for Disease Control and P…

Lots to check out

The Oil City sesquicentennial celebration Sunday in Justus Park was a big hit, and a number of people who attended the event then stopped at the Venango Museum on Seneca Street to view new local history displays that are on exhibit.

All Pennsylvania adults eligible for vaccine on Tuesday

Pennsylvania will expand eligibility for the COVID-19 vaccine to all adults beginning Tuesday, nearly a week ahead of schedule, state officials announced today.

Hundreds of people turned out to Justus Park in celebration of Oil City's 150 years of history that's "unique, noble and quirky" and to look forward to a "bright and promising future," as two of the speakers put it Sunday.

HARRISBURG — The state Department of Health announced the tri-county area reported 95 new cases over the past week.

JAMIE BARKER, HAPPY MOTHER’S DAY. I’M PROUD OF YOU!! From…