NOTICE: Due to recent updates, you may need to log out (located under your screen name or account number in the top right corner of the site) and log back in to refresh your subscription. 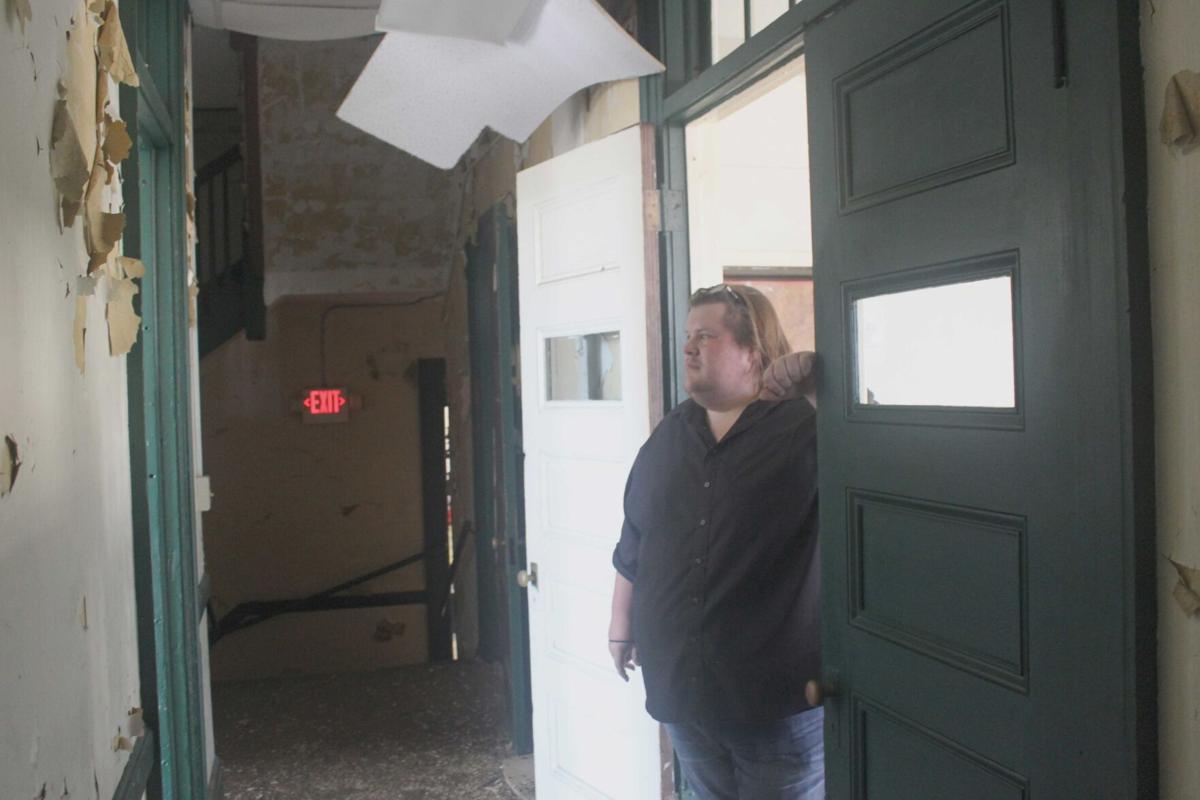 Nathaniel Licht looks over some of the deterioration on the second floor of the former Titusville YMCA building at 201 West Spring St. Licht said a lot of the damage resulted from the heat being turned off while the building sat empty. (By Dillon Provenza) 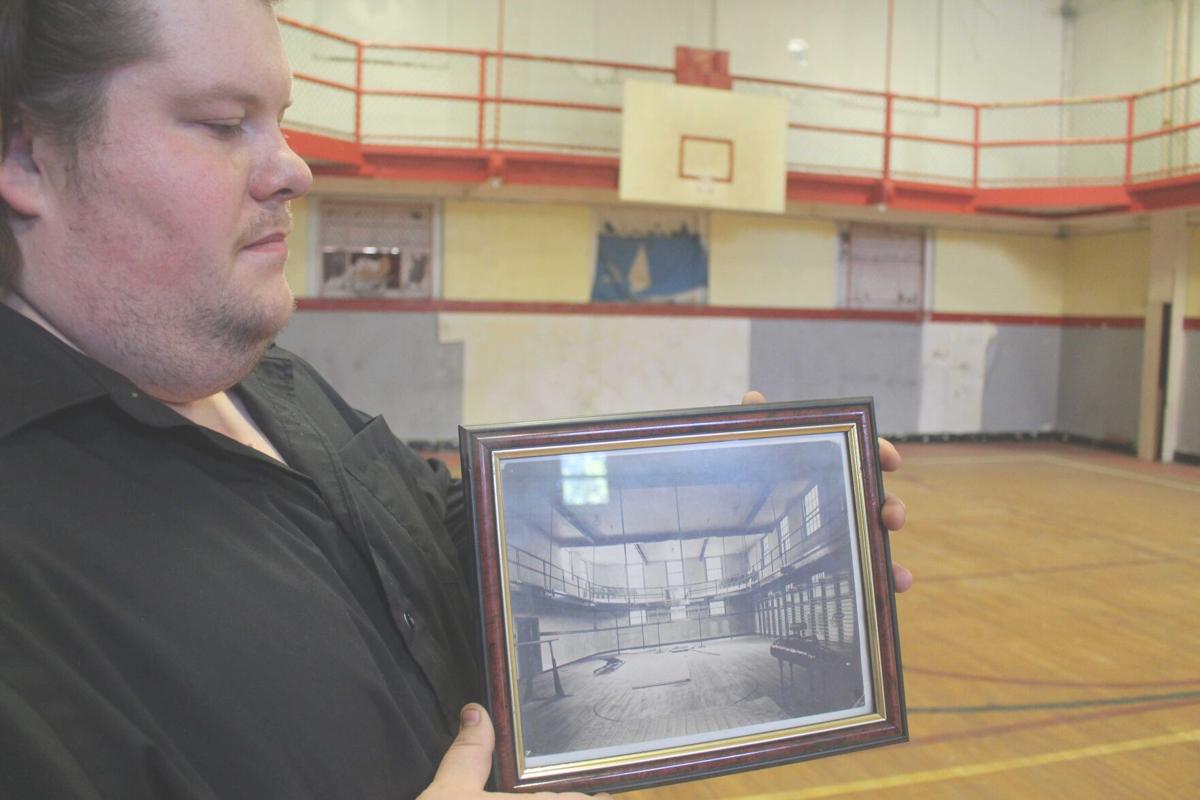 Nathaniel Licht holds a picture that he estimates is from the 1920s of the old Titusville YMCA gym. Licht said he is "looking for any historic photos people may have of the building or any stories they want to share." (By Dillon Provenza) 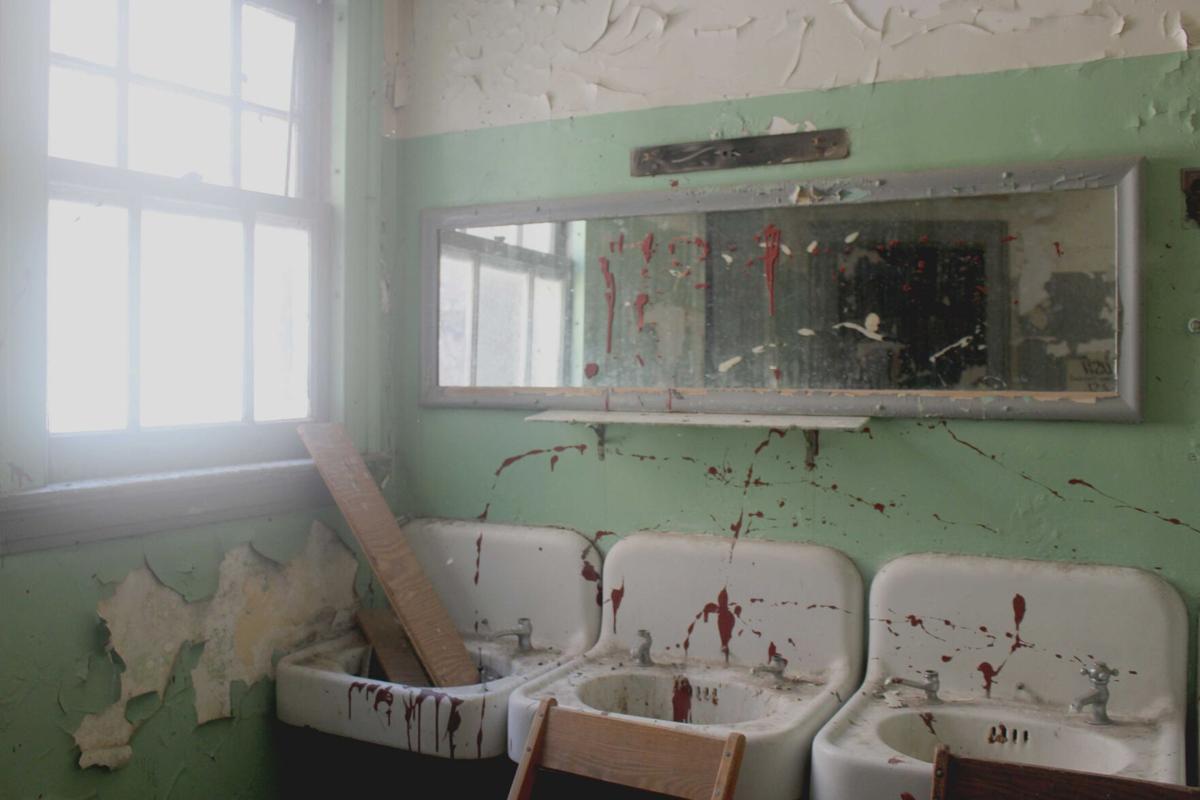 The infamous painted-over porcelain sinks at the old Titusville YMCA that Nathaniel Licht remembers from his youth still remain, along with many other haunted house decorations on the third floor. (By Dillon Provenza)

Nathaniel Licht looks over some of the deterioration on the second floor of the former Titusville YMCA building at 201 West Spring St. Licht said a lot of the damage resulted from the heat being turned off while the building sat empty. (By Dillon Provenza)

Nathaniel Licht holds a picture that he estimates is from the 1920s of the old Titusville YMCA gym. Licht said he is "looking for any historic photos people may have of the building or any stories they want to share." (By Dillon Provenza)

The infamous painted-over porcelain sinks at the old Titusville YMCA that Nathaniel Licht remembers from his youth still remain, along with many other haunted house decorations on the third floor. (By Dillon Provenza)

A Titusville resident with a penchant for preservation purchased the old YMCA building in town with plans to revive its splendor.

Nathaniel Licht bought the 201 West Spring St. structure last week after previously driving past the building twice a day and thinking "wow, that's going to be torn down," he said.

"Usually I get these ideas and I can shake them," Licht said. "This has been seven or eight months and I couldn't drop it. I was just looking at the building and said 'this is a much better building than everyone says it is'," he added.

Licht said many in the local community expected the building, which he now calls "the Parkside", to also meet the familiar, destructive fate of so many other local historic buildings.

The structure was built in 1913 to house the original YMCA of Titusville until the organization relocated in June 2014 to a new spot on West Walnut Street.

"It's been like a home away from home for a lot of people," said Kim Ciccarelli, CEO of the Titusville YMCA. "I'm happy it's not just going to be a parking lot."

"That's the joke in Titusville" Licht said with a wave of his hand. "And then parking lot" as he referred to the multitude of buildings in town that became parking lots.

Licht was quick to defend his hometown where he was raised "a block and a half away" from the hospital where he was born.

"Well I don't like it when people say Titusville tears buildings down" Licht said. "It's not the town, it's private investors."

Licht, who will turn 26 on Saturday, also made sure to point out the private investors in Titusville who are revitalizing old buildings like Titusville Ironworks, Stonehouse Jack and Titusville Towne Square.

"Those are all fantastic projects," Licht said. "They're truly invested in the town."

"I think we are at the point now, whether it be Titusville, Oil City, Franklin or Meadville, where you really can't afford to lose any more historical buildings," Licht said."I'm afraid if we lose any more, we are just tearing down our town and that's just not ideal."

Licht said he is already at work prying away some of the wood panel walls and drop ceilings that makes the building look "like the 1970s puked on it."

"You can take any wall out of this building and the building still stands," Licht said. "The goal is to have all the original walls remain."

While he had many slights to the drab disco-era designs inside the building, Licht would enthusiastically point out original features of the building that had been hidden away.

"It's a phenomenal building, it's just covered in the 70's," he said

From showing the original YMCA check-in counter to the sturdy tile work that lay under a bathroom's linoleum, Licht was enthralled by the architecture.

"Everyone who has ever lived in Titusville has had some tie to this building," Licht said.

Licht said he remembers being about six years old and walking through a haunted house that was set up in the building.

"I was not scared of the haunted house they were doing, I could not get over that they were spray painting on the porcelain tile sinks and spreading grape jelly on the handrails," Licht said. "That's the first time I remember ever actually caring for a building."

"People think this building is done," Licht said. "I think it could fill another need."

While Licht could rattle off an idea for every area in the building, he said "I never plan anything, I have a direction."

Licht said his current plan is to put in storefronts on the first floor and office space and an apartment on the second floor.

In the basement, Licht said he would add "maybe a restaurant."

"I don't know, someone comes to me with an idea and I'm willing to work with them," Licht said.

"We are going to convert the gymnasium into the Parkside Ballroom which will be an events area," Licht said. "And like I said I can't stress enough, that's going to be a couple years out."

Licht said he hopes to utilize the grand views of the adjacent Scheide Park and reopen many of the boarded-up windows in the building.

"The whole place is just going to light up," he said. "We are going to have the Parkside performance stage with fully installed sound and tech, perfect for weddings. You look at it and go 'whoa this is a lot'."

Licht said he is comfortable with doing cosmetic renovations.

"Most of the work I am going to do myself," Licht said. "We are not going to hire any firms...it's going to be me and friends."

Light said his parents, Larry and Kathy Licht, have been renovating the property for about 10 years.

"I was pretty lucky to grow up in a family that actively remodels things," Licht said.

In fact, Licht said this isn't the first time someone in his family has renovated a former YMCA building.

Licht said his uncle, John Meehan, "purchased the old YMCA of Alton, Illinois, several years ago, did some work on it and sold it again."

"I remember being 10 years old and walking through that building," Licht said. "And he was the first person that I actually called about it and said 'hey I have a few questions about the YMCA you did over there'," Licht said.

Licht said he is inviting anyone who is interested to stop by the property at noon Saturday and help with the clean-up process.

He also said he will have drinks and masks available, and his father will be cooking burgers and hot dogs for the volunteers.