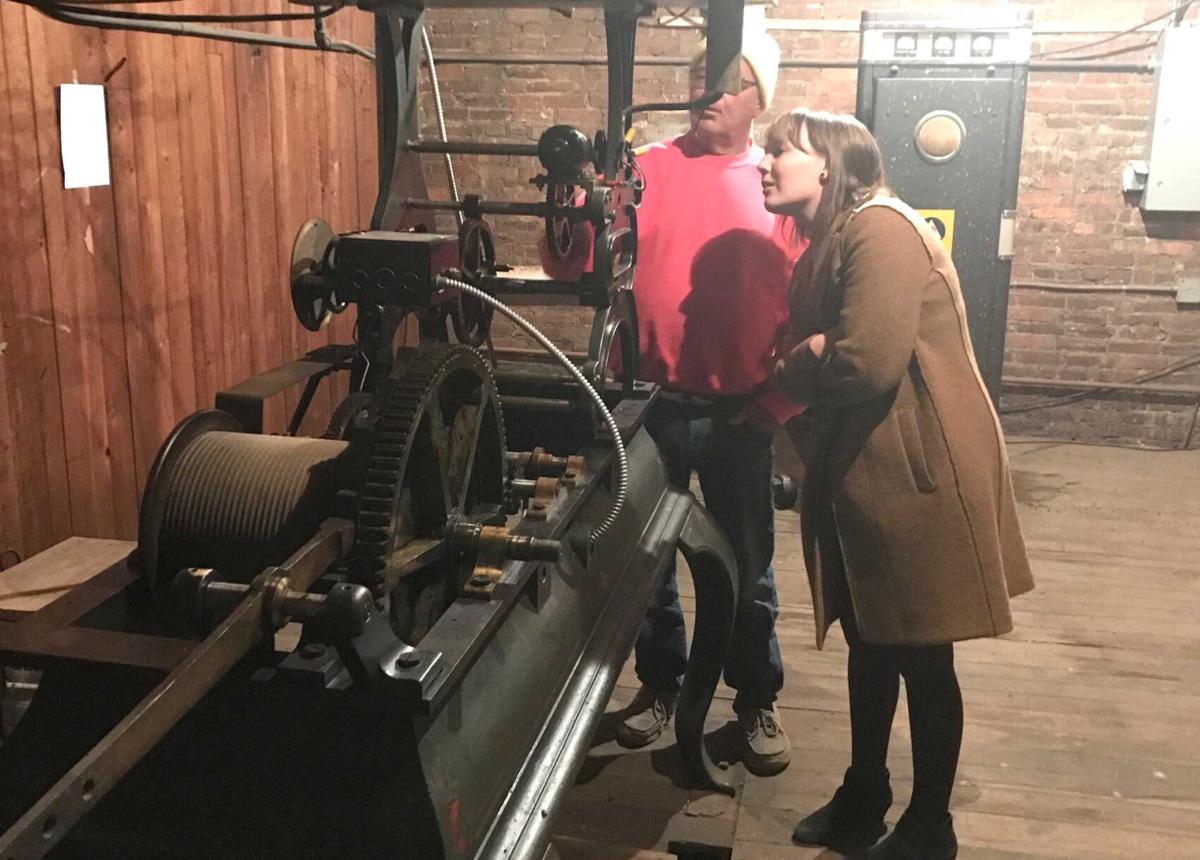 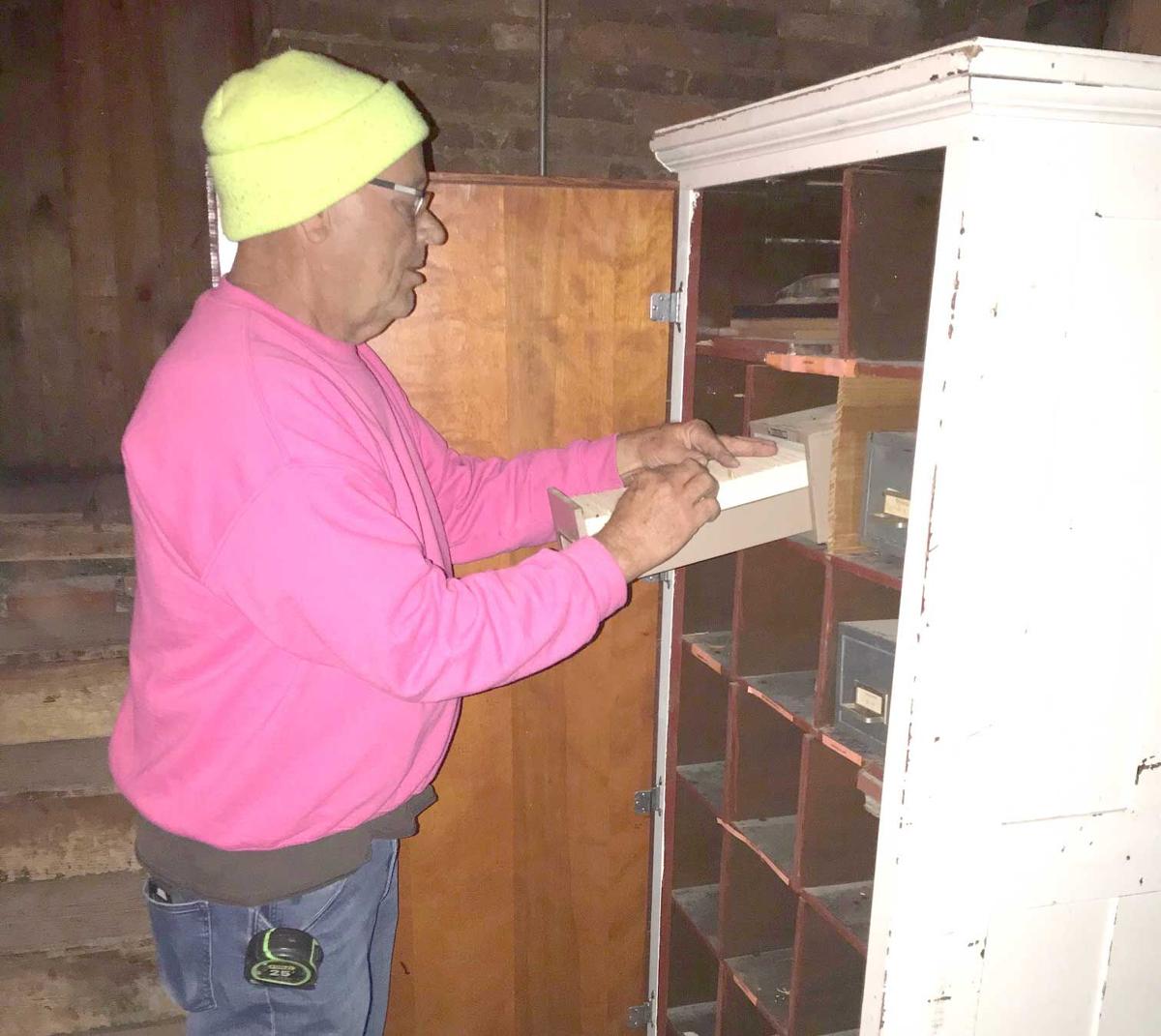 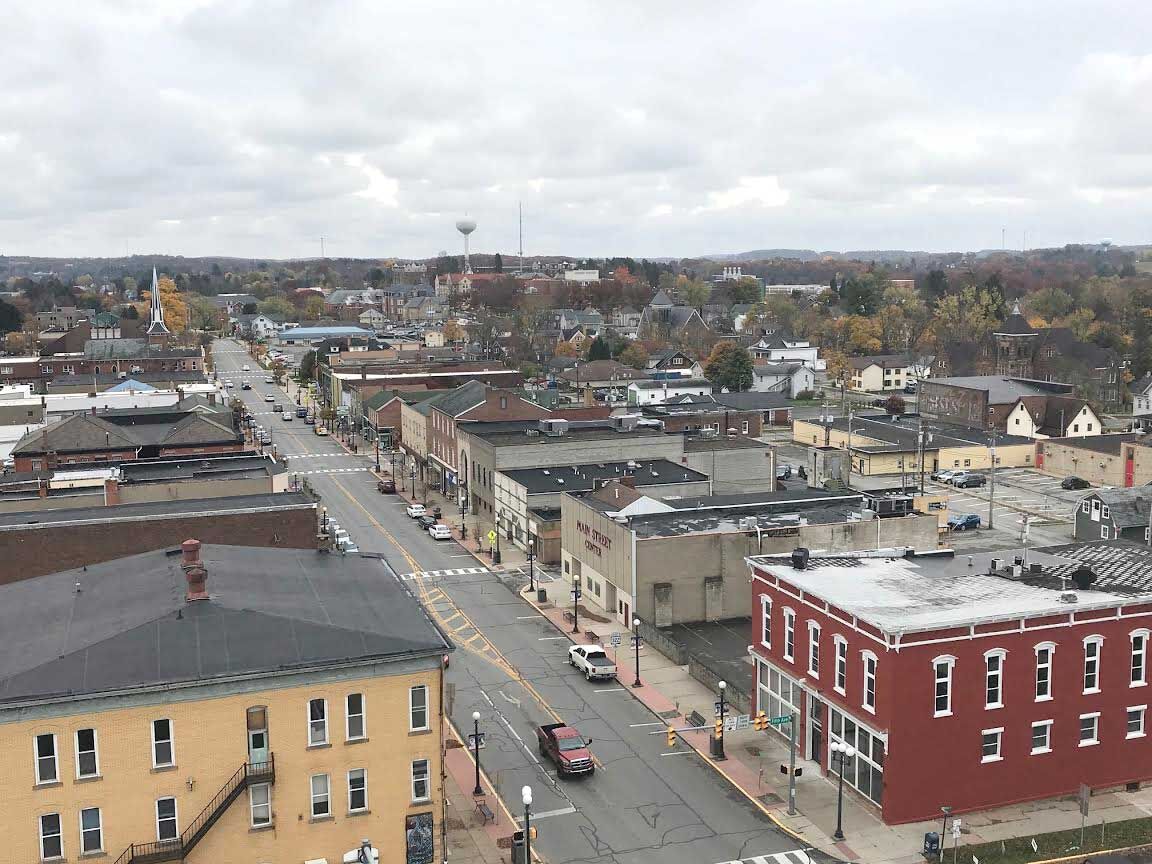 A view of Clarion from atop the courthouse bell tower. (By Randy Bartley) 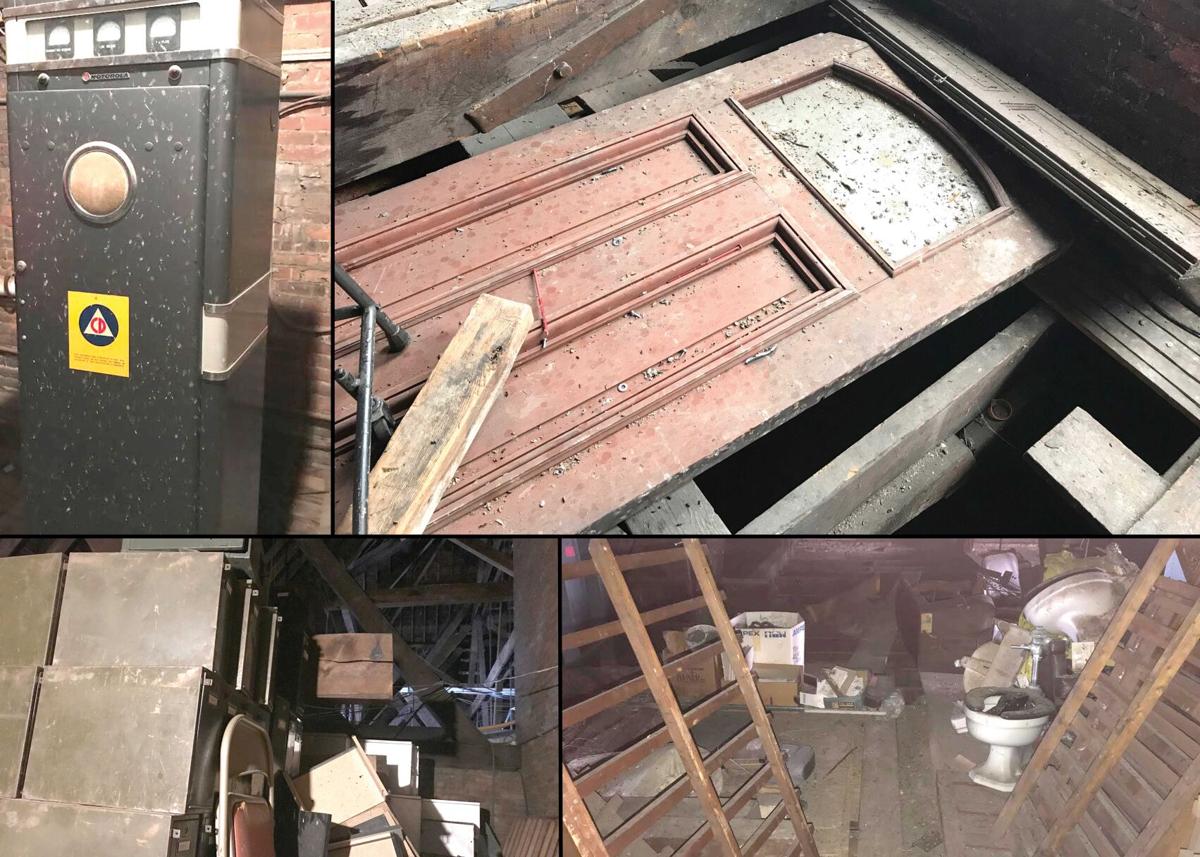 A variety of items are stored in the Clarion County Courthouse attic, including doors, such as one that sits across planks and joists; a Civil Defense system transmitter, which was used during the Cold War; old Election Day ballot boxes; and even toilets. (By Randy Bartley)

A view of Clarion from atop the courthouse bell tower. (By Randy Bartley)

A variety of items are stored in the Clarion County Courthouse attic, including doors, such as one that sits across planks and joists; a Civil Defense system transmitter, which was used during the Cold War; old Election Day ballot boxes; and even toilets. (By Randy Bartley)

CLARION - Anyone who walks by the Clarion County Courthouse could be inclined to stop in their tracks and be awestruck by the Victorian-style structure, particularly its clock tower.

Beyond the aesthetic beauty of the building, what's really not common knowledge about it is the section above the ceiling of Courtroom No. 1 - an attic that rivals any found in a home that is full of both mementos and useless junk.

It is there that leftover items from earlier renovations to the courthouse have been stored. Question is, who took all the seemingly endless number of items, including three toilets, into the attic?

State Rep. Donna Oberlander recalled during her time as a Clarion County commissioner, about 12 years ago, the county had been notified that no one was permitted to be in the courthouse attic due to liability issues.

"I don't recall how those items got into the attic," she said. "I am pretty sure we didn't send any toilets up there."

Greg Mortimer, the county's longtime register and recorder, said the county, 10 to 15 years ago, wanted records stored in that area to be removed due to insurance concerns. However, he did not recall items being moved into the attic.

Clarion County Commissioner Ted Tharan recently led an expedition for the newspaper into the attic, which is accessible through a locked door on the third floor.

The first thing that greets the eye is a stack of old ballot boxes at the top of the stairs in the bell tower. The boxes date to an era when paper ballots were completed on Election Day and dropped into the box.

"Who knows? We may be using them again," Tharan quipped.

After the first set of steps is a smaller room that contains a number of filing cabinets. Clarion attorney Christy Logue peeked into a cabinet of 60-year-old street indexes while Tharan explored a filing cabinet with documents dating to the 1950s.

Tharan said the location of these documents highlighted the need for secure document storage, a problem that has plagued the county for years, and that the records will be moved to the former Sorce building in Paint Township, which the county purchased in August.

There is no true floor in the attic. Planks have been laid across the joists, and in some places a few random sheets of material of varied construction were laid down. A door, possibly dating to the original construction, was laid down as a bridge between two sections.

There is a gap of 8 feet that separates the ceiling of the courtroom and the makeshift floor in the attic. At times, the space between the boards is daunting. A misstep could land an unwary adventurer in Judge Sara Seidle-Patton's courtroom.

Sitting on those more secure areas are seats that Tharan believes could have originally been in Courtroom No. 2.

Some of the original wood paneling is stacked in different areas.

"We will use that when we do some remodeling in the courthouse," Tharan said.

There is a stack of dark wooden benches with red leather-padded seats. Tharan believes the benches could have been part of the original design.

"We can definitely use these," he said.

Crammed in the corners are boxes of documents that appear to be fairly modern, judging by the advertisements on the cardboard boxes. Other items were stuffed into the deep recesses of the attic, where it is deemed unsafe to venture.

The toilet fixtures, though, puzzle Tharan.

"I can't imagine why anyone would want to lug toilets into an attic," he said.

Looking around the attic, Tharan said, "We need to clean this out. This has to be a priority."

One item that can be seen from the street are the Clarion Courthouse owls, which were placed in the eastern and western windows of the attic.

The owls, it has been surmised, were probably intended to ward off pigeons. The construction of the mock predators is of painted plastic. The effort, however, appears to have been in vain, as the entire attic area is dotted with excrement from bats, pigeons and rats.

A climb up another ladder in the bell tower leads to the clock floor. The New York-based Howard Clock Co. installed the clock works. Both the clock works and the 9-foot-diameter clock dials that were installed in 1888 still work.

The clock faces are largely original, although the western face has had repairs with the modern answer for all repairs - a gray, one-sided, sticky tape.

A door leads to the balconies placed beneath each clock face. The balcony on the south side offers a breathtaking view of the Clarion area.

A reminder of a bygone era is an old Civil Defense transmitter that was used during the Cold War to alert citizens of impending disasters. The interior of the transmitter contains numerous tubes.

Smathers said he hopes to clean up the old transmitter and move it into the new 911 center at the Sorce building.

"Many people today don't know about the Civil Defense and this would be a good reminder," he said.

An old sign attached to an interior post in the clock room is a late 19th-century pasteboard notice prohibiting smoking, a wise precaution in a building with a wooden roof.

Another ladder leads to the top of the bell tower. The bell, cast by the Baltimore-based McShane Bell Foundry still sits in its original cradle. The 1,313-pound bell has been marked with chalk graffiti, including the suggestion that "no birds allowed." It's obvious that birds ignored the sign.

Throughout the attic and bell tower is graffiti left by people who have worked in various areas, many dating to the 1950s.

The mysteries of the Clarion County Courthouse don't end in the attic. On the third floor, a closed-off room was discovered.

"I realized the dimensions of the hallway didn't match with the outside dimension," Tharan said.

And, who knows? More surprises, including who put the toilets in the attic, could be in store.

Three individuals from Central Elementary School tested positive for COVID-19 over the weekend, according to a post by Franklin Area School District Superintendent Mark Loucks on the district's Facebook page.

The National Weather service in Pittsburgh has issued a Winter Storm Warning for Venango and Mercer counties from 1 a.m. Tuesday through 7 a.m. Wednesday. Heavy snow is expected with accumulations of 5 to 8 inches, according to the NWS.

HARRISBURG - The state Department of Health over the weekend announced the tri-county area reported an increase of 136 cases of COVID-19.

No Starlight Ball in '21

In a year that would have marked a milestone, one of Oil City's most popular holiday venues for young students has been canceled due to coronavirus-related health directives.

Three people were injured in a water rescue Tuesday on the Allegheny River in Oil City after the city fire department's boat flipped during the rescue.

An amazing 1,260 turkeys were distributed at the annual Friends for Food campaign in a socially distanced drive-through on Saturday at the Rocky Grove fire hall.

Light-Up Night ignites magic and excitement of the season

Franklin's annual Light-Up Night on Saturday may not have had its usual pomp and circumstance, but the simple celebration of the holiday season succeeded in what it always set out to do and ignited the magic and excitement in the hearts of countless residents.

HARRISBURG — The state Department of Health over the weekend announced the tri-county area reported an increase of 111 cases of COVID-19.

Love for their childhood neighborhood combined with cooking talents and a big supply of food are prompting two Oil City sisters to offer a bountiful spread for Thanksgiving.

CLARION - Anyone who walks by the Clarion County Courthouse could be inclined to stop in their tracks and be awestruck by the Victorian-style structure, particularly its clock tower.