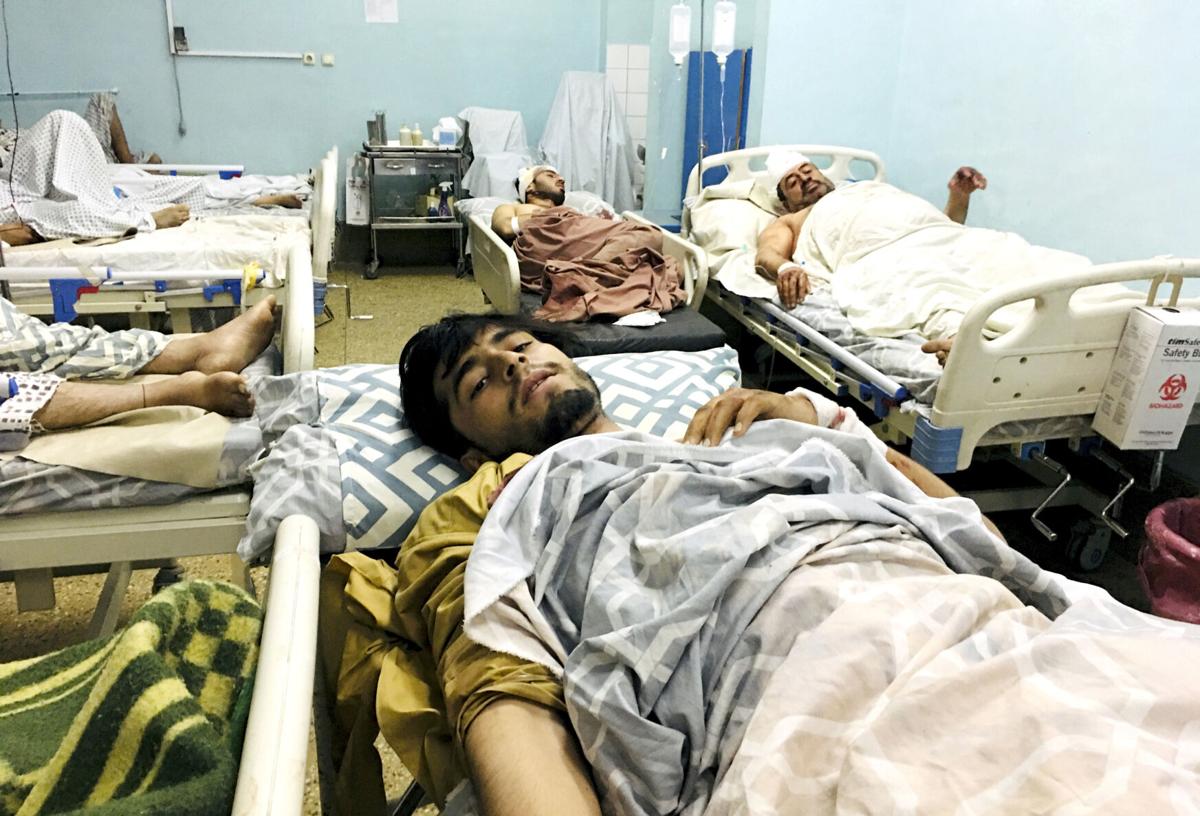 Wounded Afghans lie on a bed at a hospital after explosions outside the airport in Kabul, Afghanistan on Thursday. 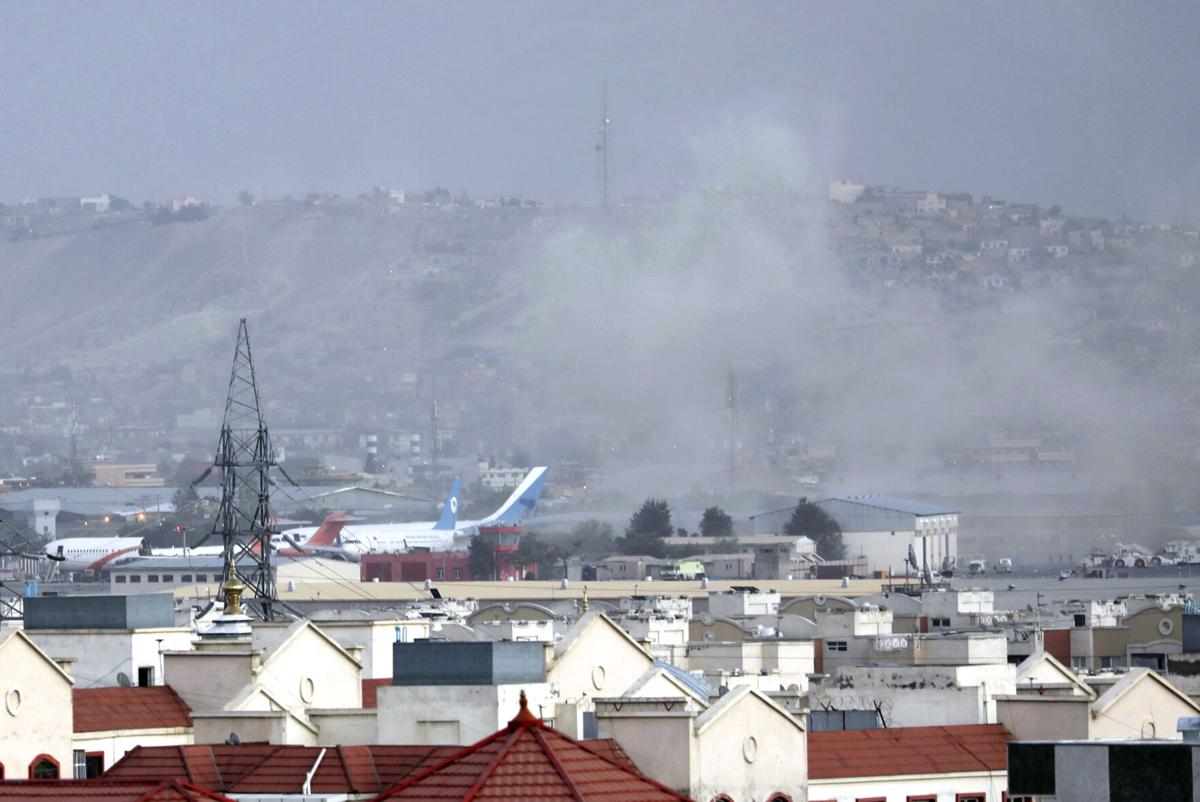 Smoke rises from an explosion outside the airport in Kabul, Afghanistan on Thursday.

Wounded Afghans lie on a bed at a hospital after explosions outside the airport in Kabul, Afghanistan on Thursday.

Smoke rises from an explosion outside the airport in Kabul, Afghanistan on Thursday.

KABUL, Afghanistan (AP) — Two suicide bombers and gunmen attacked crowds of Afghans flocking to Kabul’s airport Thursday, transforming a scene of desperation into one of horror in the waning days of an airlift for those fleeing the Taliban takeover. The attacks killed at least 60 Afghans and 13 U.S. troops, Afghan and U.S. officials said.

The U.S. general overseeing the evacuation said the attacks would not stop the United States from evacuating Americans and others, and flights out were continuing. Gen. Frank McKenzie, head of U.S. Central Command, said there was a large amount of security at the airport, and alternate routes were being used to get evacuees in. About 5,000 people were awaiting flights on the airfield, McKenzie said.

OC gets grant for park work, including replacing bandshell

Oil City Council members learned Thursday the city has received a grant for improvements at Justus Park, including the replacement of the bandshell.

Fire departments are like families, according to Sandy Lewis, who is the chaplain of Sandycreek Volunteer Fire Department.

Cranberry Township supervisors on Thursday unanimously approved the appointment of Regina DeLoe to a vacant seat on the township’s zoning hearing board.

NEW BETHLEHEM — Both sides in the continuing labor dispute in the Redbank Valley School District will be back at the table tonight for another negotiating session.

Community-based care providers in the Oil Region are able to meet many Polk State Center residents’ housing needs, says one CEO, but their care needs are going to be harder to meet.

The goat that has been wandering about the Franklin and Sugarcreek areas since early this month has been caught.

Volunteers in the Court Appointed Special Advocates program in Venango County say the opportunity to have a positive impact on the lives of children in need keeps them going.

Lots to do at OC library

The Oil City Library was a good place for several area residents to spend the day Tuesday.

How to create and maintain as much normalcy for students as possible — while remaining safe during a pandemic — continued to be a major talking point at Valley Grove School Board’s work session Monday.

An Oil City High School student and two parents of Oil City students spoke at Monday’s Oil City School Board meeting and voiced their opposition to the mask mandate currently in place at all K though 12 schools in Pennsylvania.

CLARION — The Constitution Party of Clarion County wants to get its message of limited government out to the public when its hosts a Founders Series presentation at 7 p.m. Thursday at Trinity Point Church of God just south of Interstate 80 in Monroe Township.

“We were a little unsure coming into this festival what to expect,” said Sue Williams, Executive Director of the Venango Area Chamber of Commerce during Saturday’s Cranberry Festival.

Oberlander: Wolf's 'overreach' will be addressed

CLARION — State Rep. Donna Oberlander, R-63rd District, expects what she calls the Wolf administration’s “overreach” to be at “the top of the list,” along with economics, when the Republican-controlled Legislature returns to session today.

Clarion state police said two people died in a two-vehicle accident at the intersection of Route 28 and Shannondale Road in Redbank Township on Friday evening.

CLARION — There is new life in the old Wein’s Building on Main Street in Clarion — two lives in fact.

An 89-year-old Marienville man continued his personal tradition this year of putting together a display in St. Ann’s Catholic Church that honored first responders and the U.S. military on Sept. 11.

The management team at TrAils To Ales hopes to bring technological drink pours and more people to downtown Franklin with its second location.

A new haunted attraction opens today at the Cranberry Mall, and its creator is looking to creep out visitors at the castle of fear.

A Cochranton man pleaded guilty Thursday in Crawford County Court to the murder of his stepmother and half brother at their Guys Mills home in 2019 and was sentenced to decades in prison.

FRILLS CORNERS — Classes at North Clarion High School and Elementary School were suspended Thursday and today to allow for a “deep cleaning” of the buildings in the wake of a COVID-19 outbreak.

WASHINGTON (AP) — The Occupational Safety and Health Administration doesn’t make many headlines. Charged with keeping America’s workplaces safe, it usually busies itself with tasks such as setting and enforcing standards for goggles, hardhats and ladders.

Lead pipes in the Franklin area will start to be replaced after the city’s general authority members approved a project bid at their meeting Tuesday.

HARRISBURG (AP) — Republicans in the Pennsylvania Senate prepared Wednesday to test how far they can go in pursuing what the GOP calls a “forensic investigation” of last year’s presidential election, as Democrats accused them of helping perpetuate the “big lie” that former President Donald T…

An Oil City man is facing charges for breaking into a house along Route 62 in Cranberry Township in the early hours Wednesday and beating a man with a baseball bat to the point the man lost consciousness for a short period.

In an answer to a lawsuit filed Jan. 29, 2020, Senior Deputy Attorney General Jessica Davis denies a majority of the allegations against state officials, intermediate care facility (ICF) administration and Gov. Tom Wolf in a case centering on the closing of Polk and White Haven state centers.

READING (AP) — Pennsylvania residents who are unvaccinated against the coronavirus were far more likely to contract COVID-19, become hospitalized and die than those who got the shot, health officials said Tuesday in the first public release of data on so-called “breakthrough” infections in t…

Drivers: Looking for a long-term career and not just a

Drivers: Looking for a long-term career and not just a jo…