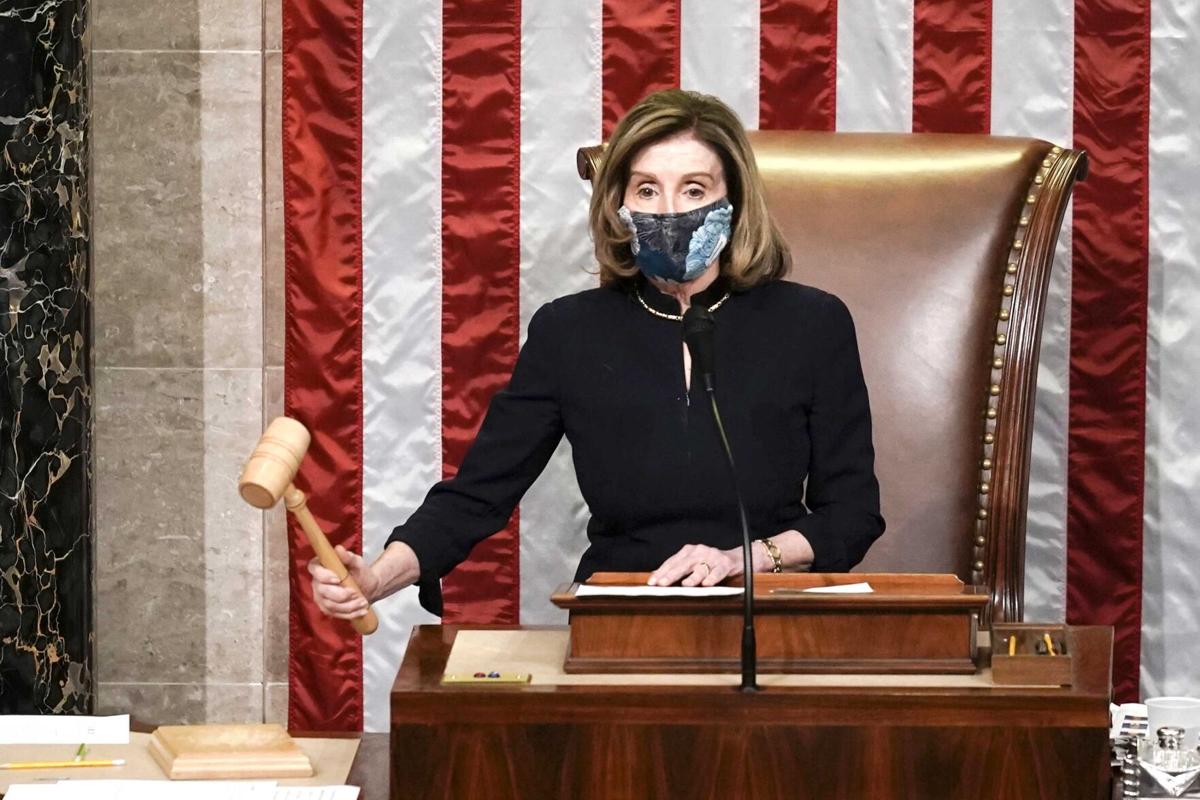 Speaker of the House Nancy Pelosi, D-Calif., gavels in the final vote of the impeachment of President Donald Trump Wednesday at the Capitol. (AP) 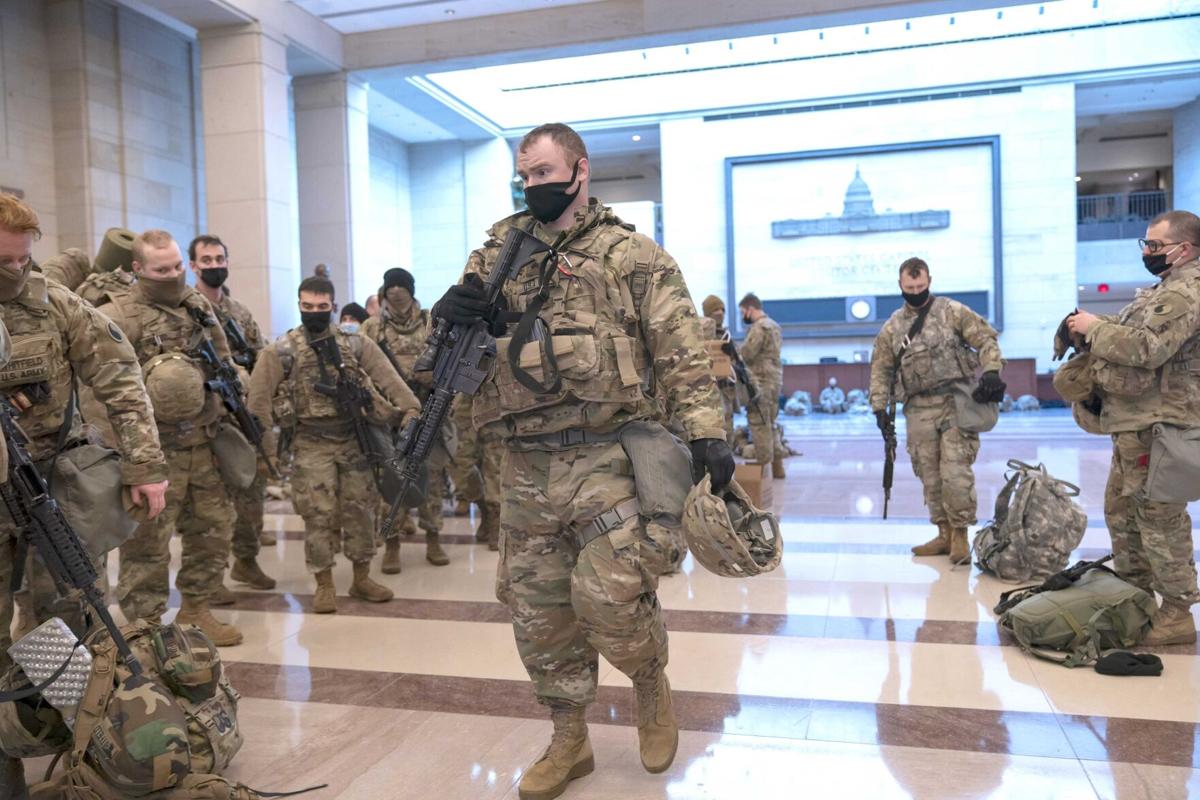 Hundreds of National Guard troops hold inside the Capitol Visitor's Center to reinforce security at the Capitol Wednesday. (AP) 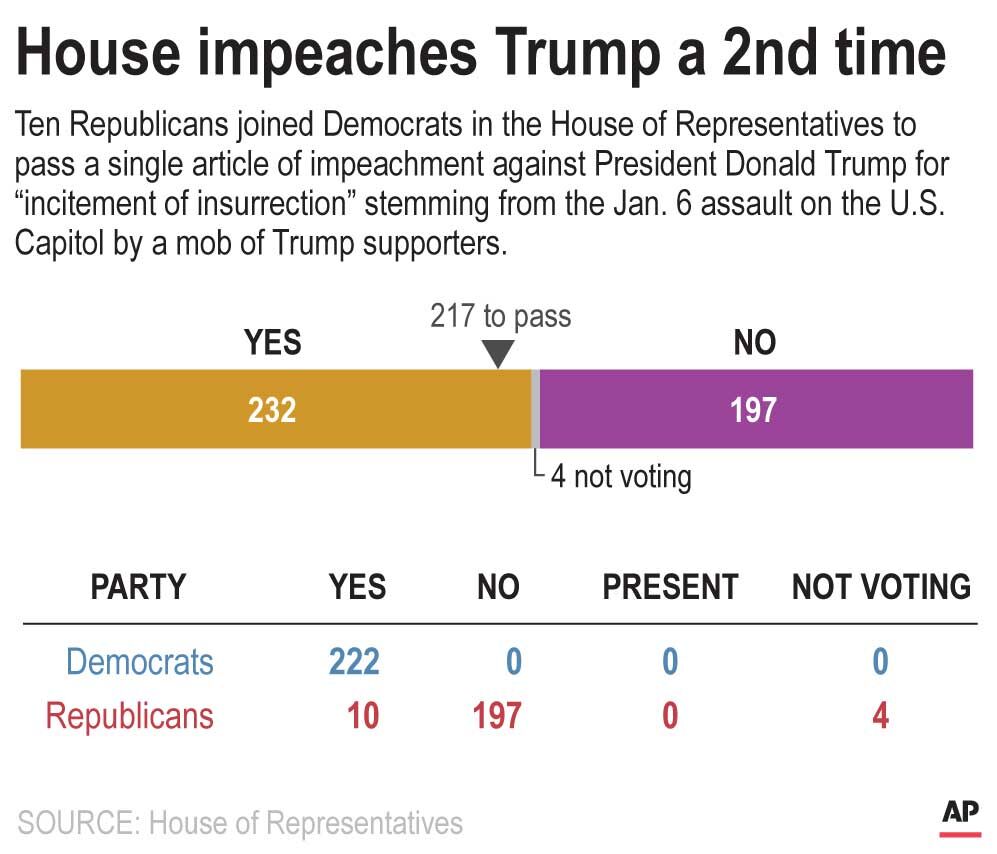 Speaker of the House Nancy Pelosi, D-Calif., gavels in the final vote of the impeachment of President Donald Trump Wednesday at the Capitol. (AP)

Hundreds of National Guard troops hold inside the Capitol Visitor's Center to reinforce security at the Capitol Wednesday. (AP)

WASHINGTON (AP) - President Donald Trump was impeached by the U.S. House for a historic second time Wednesday, charged with "incitement of insurrection" over the mob siege of the Capitol in a swift collapse of his final days in office.

With the Capitol secured by armed National Guard troops inside and out, the House voted 232-197 to impeach Trump. The proceedings moved quickly, with lawmakers voting just one week after violent pro-Trump loyalists stormed the U.S. Capitol after the president's calls for them to "fight like hell" against the election results.

More than 50 Venango County residents walked a mile loop in sub-freezing temperatures around Oil City on Saturday to raise awareness for the anti-abortion movement.

'I think the trial is stupid'

WASHINGTON (AP) - A growing number of Republican senators say they oppose holding an impeachment trial, a sign of the dimming chances that former President Donald Trump will be convicted on the charge that he incited a siege of the U.S. Capitol.

Tri-county has 51 cases over weekend

HARRISBURG - The state Department of Health over the weekend announced 51 new cases of COVID-19 and six additional virus-related deaths were reported from the tri-county area.

'We are in a national emergency'

WASHINGTON (AP) - Joe Biden's ambitious opening bid, his $1.9 trillion American Rescue economic package, will test the new president's relationship with Congress and force a crucial choice between his policy vision and a desire for bipartisan unity.

Clarion Hospital has site to give shots

CLARION - Clarion Hospital will open its first large-scale, COVID-19 vaccination site on Wednesday in the former Peebles/Gordman's building near the Clarion Mall.

FOXBURG - Local government offices are huge bureaucracies in large cities, but if one lives but in many small boroughs and townships the bureaucracy can be one person.

HARRISBURG — The state Department of Health on Friday announced 25 new cases of COVID-19 and one new virus-related death from each of the counties in the tri-county area.

Clarion Hospital has site to give vaccinations

CLARION — Clarion Hospital will open its first large-scale, COVID-19 vaccination site on Wednesday in the former Peebles/Gordman’s building near the Clarion Mall.

One down, one to go.

The Oil City Fire Department is looking for a new and improved rescue boat after its previous one was badly damaged during a river event in November.

The state prison near Marienville this week recorded another massive COVID-19 cases count - this time more than 800 - to vault Forest County well over 1,000 cumulative cases.

WASHINGTON (AP) - With a burst of executive orders, President Joe Biden served notice Thursday that America's war on COVID-19 is under new command, promising an anxious nation progress to reduce infections and lift the siege it has endured for nearly a year.

The state prison near Marienville this week recorded another massive COVID-19 cases count — this time more than 800 — to vault Forest County well over 1,000 cumulative cases.

HARRISBURG — The state Department of Health on Thursday announced 537 new cases of COVID-19 and five new virus-related deaths were reported from the tri-county area.

WASHINGTON (AP) - Vice President Kamala Harris broke the barrier that has kept men at the top ranks of American power for more than two centuries when she took the oath Wednesday to hold the nation's second-highest office.

Biden appeals for unity to take on crises

WASHINGTON (AP) - Joe Biden was sworn in as the 46th president of the United States on Wednesday, declaring that "democracy has prevailed" and summoning American resilience and unity to confront the nation's confluence of crises.

The UPMC Northwest hospital is primed to begin administering COVID-19 vaccines to those outside the health profession.

HARRISBURG — The state Department of Health on Wednesday announced 30 new cases of COVID-19 were reported from the tri-county area, as well as three new virus-related deaths from Clarion County.

'Remember all who we lost'

WASHINGTON (AP) - Hours from inauguration, President-elect Joe Biden paused on what might have been his triumphal entrance to Washington Tuesday evening to mark instead the national tragedy of the coronavirus pandemic with a moment of collective grief for Americans lost.

Tuesday was the first day some Oil City School District students were back in their classrooms for in-person learning under a hybrid model school board members approved last week.

HARRISBURG (AP) - Even as it struggles to deliver shots into arms, Pennsylvania is expanding initial eligibility for the COVID-19 vaccine to include people age 65 and over as well as younger people with serious health conditions that put them at higher risk, state health officials announced …

Last year was a hard one for scores of local families facing financial difficulties due to the COVID-19 pandemic and economic doldrums. And 2021 may bring the same woes.

HARRISBURG — The state Department of Health on Tuesday announced 18 additional local cases of COVID-19 were reported.

Students in the Cranberry Area School District will continue in the hybrid model - a combination of virtual and in-person learning - for the next few weeks. It is a plan that will be reviewed every two weeks to determine if it should change back to all remote or move forward into in-classroo…

Clarion King Day breakfast focuses on 'doing for others'

CLARION - Clarion University's annual Martin Luther King Jr. Day community breakfast Monday focused on the theme "What Are We Doing for Others."

NEW YORK (AP) - Coronavirus deaths are rising in nearly two-thirds of American states as a winter surge pushes the overall toll toward 400,000 amid warnings that a new, highly contagious variant is taking hold.

Biden to aim for unity

HARRISBURG — The state Department of Health on Monday announced 167 new cases of COVID-19 and five new virus-related deaths were reported from the tri-county area.

Tri-county has 80 cases over weekend

HARRISBURG - The state Department of Health over the weekend announced 80 new cases of COVID-19 and seven additional virus-related deaths were reported from the tri-county area.

A sudden jump in the number of COVID-19 cases last week at the state prison near Marienville is both alarming and explainable, according to an official with the Pennsylvania State Corrections Officers Association.

WILMINGTON, Del. (AP) - Joseph Robinette Biden Jr. has navigated a half-century in American politics by relentlessly positioning himself at the core of the Democratic Party.

Small groups of right-wing protesters - some of them carrying rifles - gathered outside heavily fortified statehouses around the country Sunday, outnumbered by National Guard troops and police brought in to prevent a repeat of the violence that erupted at the U.S. Capitol. As darkness fell, …

An exploratory excavation by National Fuel in Oil City's North Side business district has resulted in the loss of internet and telephone services for much of the South Side.

WILMINGTON, Del. (AP) - President-elect Joe Biden pledged Friday to boost supplies of coronavirus vaccine and set up new vaccination sites to meet his goal of 100 million shots in 100 days. It's part of a broader COVID strategy that also seeks to straighten out snags in testing and ensure mi…

MEXICO CITY (AP) - The global death toll from COVID-19 topped 2 million Friday, crossing the threshold amid a vaccine rollout so immense but so uneven that in some countries there is real hope of vanquishing the outbreak, while in other, less-developed parts of the world, it seems a far-off dream.

WASHINGTON (AP) - President Donald Trump's impeachment trial is likely to start after Joe Biden's inauguration, and the Republican leader, Mitch McConnell, is telling senators their decision whether to convict the outgoing president over the Capitol riot will be a "vote of conscience."

HARRISBURG — The state Department of Health on Friday announced 35 new cases of COVID-19 from the tri-county area and one new virus-related death from Clarion County.