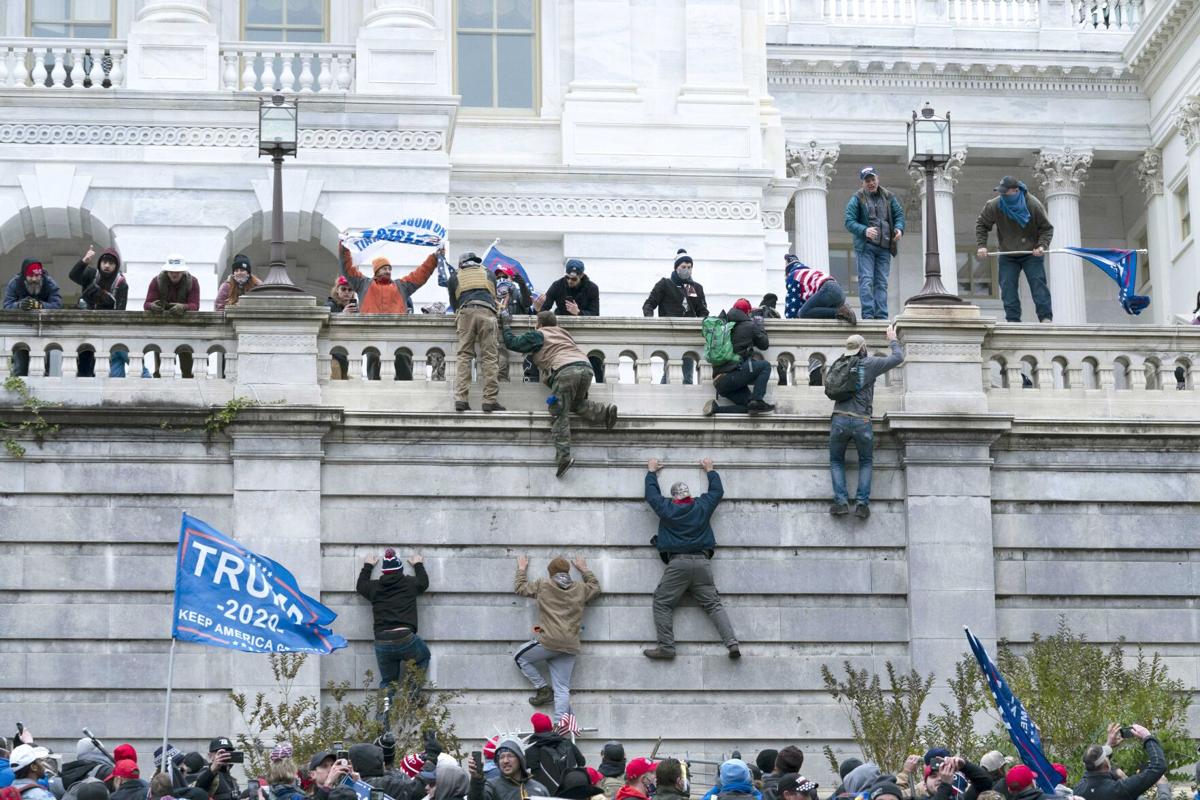 Protesters climb the west wall of the U.S. Capitol. (AP) 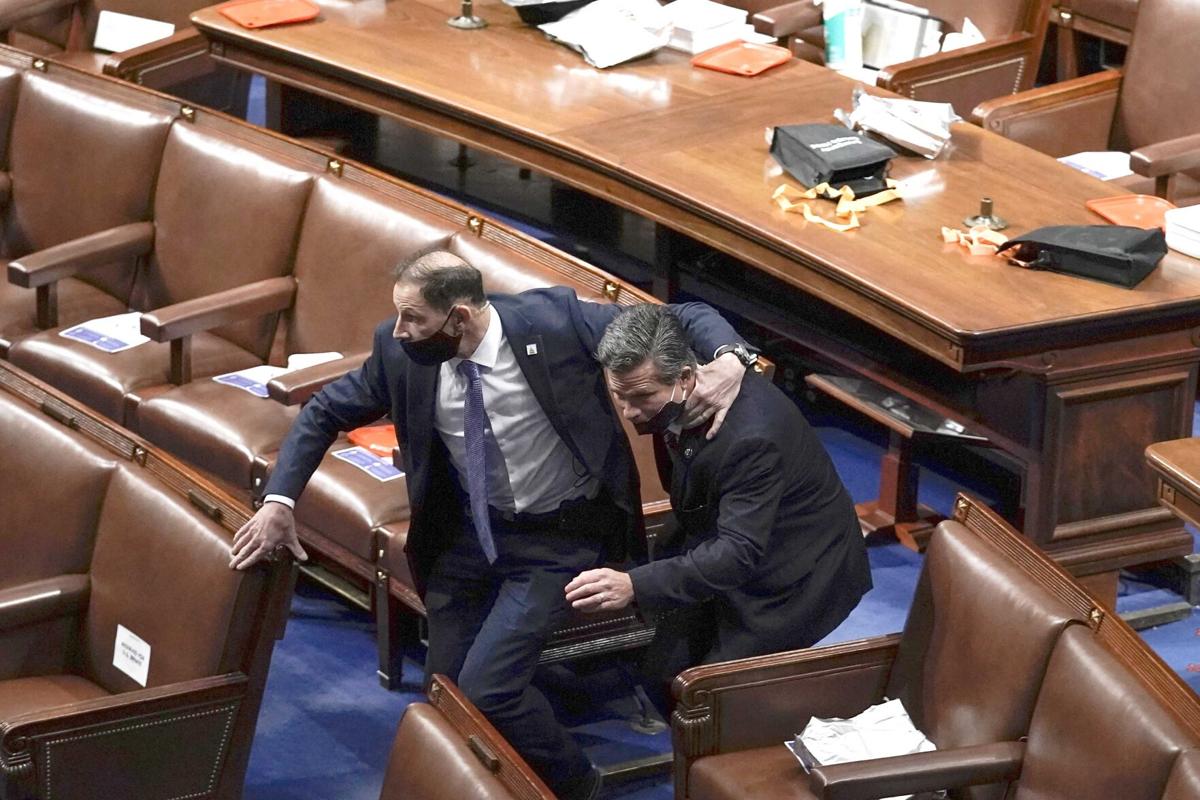 Lawmakers evacuate the floor as protesters try to break into the House Chamber at the U.S. Capitol. (AP)

Protesters climb the west wall of the U.S. Capitol. (AP)

Lawmakers evacuate the floor as protesters try to break into the House Chamber at the U.S. Capitol. (AP)

WASHINGTON (AP) - President Donald Trump appeared to excuse the violent occupation of the U.S. Capitol by his supporters Wednesday, hours after they stormed the symbol of American democracy in an effort to disrupt the formalization of his electoral defeat.

Trump, who had encouraged his supporters to march on the Capitol to protest lawmakers' actions, expressed empathy for the mob, which forced its way inside, clashed with police and forced lawmakers into hiding.

HARRISBURG — The state Department of Health on Wednesday announced 30 new cases of COVID-19 were reported from the tri-county area, as well as three new virus-related deaths from Clarion County.

Tuesday was the first day some Oil City School District students were back in their classrooms for in-person learning under a hybrid model school board members approved last week.

'Remember all who we lost'

WASHINGTON (AP) - Hours from inauguration, President-elect Joe Biden paused on what might have been his triumphal entrance to Washington Tuesday evening to mark instead the national tragedy of the coronavirus pandemic with a moment of collective grief for Americans lost.

HARRISBURG (AP) - Even as it struggles to deliver shots into arms, Pennsylvania is expanding initial eligibility for the COVID-19 vaccine to include people age 65 and over as well as younger people with serious health conditions that put them at higher risk, state health officials announced …

Last year was a hard one for scores of local families facing financial difficulties due to the COVID-19 pandemic and economic doldrums. And 2021 may bring the same woes.

HARRISBURG — The state Department of Health on Tuesday announced 18 additional local cases of COVID-19 were reported.

Biden to aim for unity

Students in the Cranberry Area School District will continue in the hybrid model - a combination of virtual and in-person learning - for the next few weeks. It is a plan that will be reviewed every two weeks to determine if it should change back to all remote or move forward into in-classroo…

Clarion King Day breakfast focuses on 'doing for others'

CLARION - Clarion University's annual Martin Luther King Jr. Day community breakfast Monday focused on the theme "What Are We Doing for Others."

NEW YORK (AP) - Coronavirus deaths are rising in nearly two-thirds of American states as a winter surge pushes the overall toll toward 400,000 amid warnings that a new, highly contagious variant is taking hold.

HARRISBURG — The state Department of Health on Monday announced 167 new cases of COVID-19 and five new virus-related deaths were reported from the tri-county area.

Tri-county has 80 cases over weekend

HARRISBURG - The state Department of Health over the weekend announced 80 new cases of COVID-19 and seven additional virus-related deaths were reported from the tri-county area.

A sudden jump in the number of COVID-19 cases last week at the state prison near Marienville is both alarming and explainable, according to an official with the Pennsylvania State Corrections Officers Association.

WILMINGTON, Del. (AP) - Joseph Robinette Biden Jr. has navigated a half-century in American politics by relentlessly positioning himself at the core of the Democratic Party.

Small groups of right-wing protesters - some of them carrying rifles - gathered outside heavily fortified statehouses around the country Sunday, outnumbered by National Guard troops and police brought in to prevent a repeat of the violence that erupted at the U.S. Capitol. As darkness fell, …

An exploratory excavation by National Fuel in Oil City's North Side business district has resulted in the loss of internet and telephone services for much of the South Side.

WILMINGTON, Del. (AP) - President-elect Joe Biden pledged Friday to boost supplies of coronavirus vaccine and set up new vaccination sites to meet his goal of 100 million shots in 100 days. It's part of a broader COVID strategy that also seeks to straighten out snags in testing and ensure mi…

MEXICO CITY (AP) - The global death toll from COVID-19 topped 2 million Friday, crossing the threshold amid a vaccine rollout so immense but so uneven that in some countries there is real hope of vanquishing the outbreak, while in other, less-developed parts of the world, it seems a far-off dream.

WASHINGTON (AP) - President Donald Trump's impeachment trial is likely to start after Joe Biden's inauguration, and the Republican leader, Mitch McConnell, is telling senators their decision whether to convict the outgoing president over the Capitol riot will be a "vote of conscience."

HARRISBURG — The state Department of Health on Friday announced 35 new cases of COVID-19 from the tri-county area and one new virus-related death from Clarion County.

WILMINGTON, Del. (AP) - Saying the nation faces "a crisis of deep human suffering," President-elect Joe Biden unveiled a $1.9 trillion coronavirus plan Thursday to turn the tide on the pandemic, speeding up vaccines and pumping out financial help to those struggling with the prolonged econom…

The first regular meeting in 2021 for the Cranberry Township supervisors focused on an old topic - the devastation caused by severe flash flooding in the summer of 2019 along two small meandering streams in the township.

HARRISBURG (AP) - A few hundred members of the Pennsylvania National Guard will be brought in to protect the state Capitol and other potential targets of unrest and violence in the week ahead, authorities said Thursday.

An Oil City woman was treated for hypothermia after she was rescued Thursday morning from the Allegheny River in Oil City.

HARRISBURG — The state Department of Health on Thursday announced 39 new cases of COVID-19 and three new virus-related deaths from the tri-county area.

WASHINGTON (AP) - President Donald Trump was impeached by the U.S. House for a historic second time Wednesday, charged with "incitement of insurrection" over the mob siege of the Capitol in a swift collapse of his final days in office.

The New York Times newspaper has a regular weekend feature called "What You Get" that applies to homes.

UPMC Northwest in Seneca has provided COVID-19 vaccines to hundreds of local residents in the last month and is developing detailed plans for mass inoculations of older residents as well as the general public.

Venango County commissioners offered a breakdown at their meeting Tuesday of how the county spent the $4.575 million in CARES funds it received.

WASHINGTON (AP) — President Donald Trump was impeached by the U.S. House for a historic second time Wednesday, charged with “incitement of insurrection” over the deadly mob siege of the Capitol in a swift and stunning collapse of his final days in office.

WASHINGTON (AP) — President Donald Trump was impeached by the U.S. House for a historic second time Wednesday, charged with “incitement of insurrection” over the deadly mob siege of the Capitol in a swift and stunning collapse of his final days in office.

HARRISBURG — The state Department of Health on Wednesday announced 214 new cases of COVID-19 were reported from the tri-county area.

HARRISBURG — The state Department of Health on Wednesday reported an increase of 141 cases in Forest County.

WASHINGTON (AP) - The U.S. House rushed ahead Tuesday toward impeaching President Donald Trump for the deadly Capitol attack, taking time only to try to persuade his vice president to push him out first. Trump showed no remorse, blaming impeachment itself for the "tremendous anger" in America.

CLARION - Clarion County's public buildings will remain closed at least for the time being.

Sigh of relief at Franklin

With elementary students back in hybrid classes at Franklin Area School District, administrators and staff are breathing a sigh of relief and organizing their next steps for when the rest of the student body follows suit.

A multi-million-dollar wastewater project slated to begin in Franklin in the next few months is closer than ever to becoming a reality.

HARRISBURG — The state Department of Health on Tuesday announced 35 new cases of COVID-19 were reported from the tri-county area for the second consecutive day.

NOTICE The North Clarion County School Board of Education is

NOTICE The North Clarion County School Board of Education…