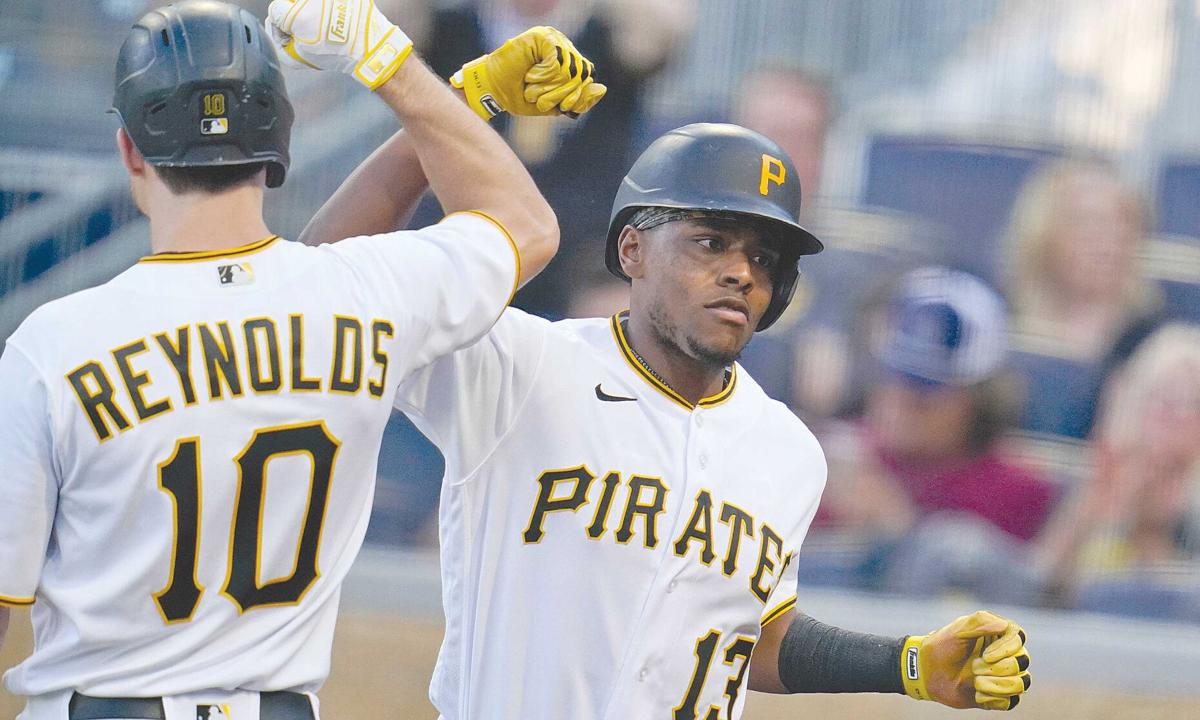 Photo by AP. Pittsburgh's Ke'Bryan Hayes (right) is greeted by Bryan Reynolds after socking a two-run homer in the first inning. 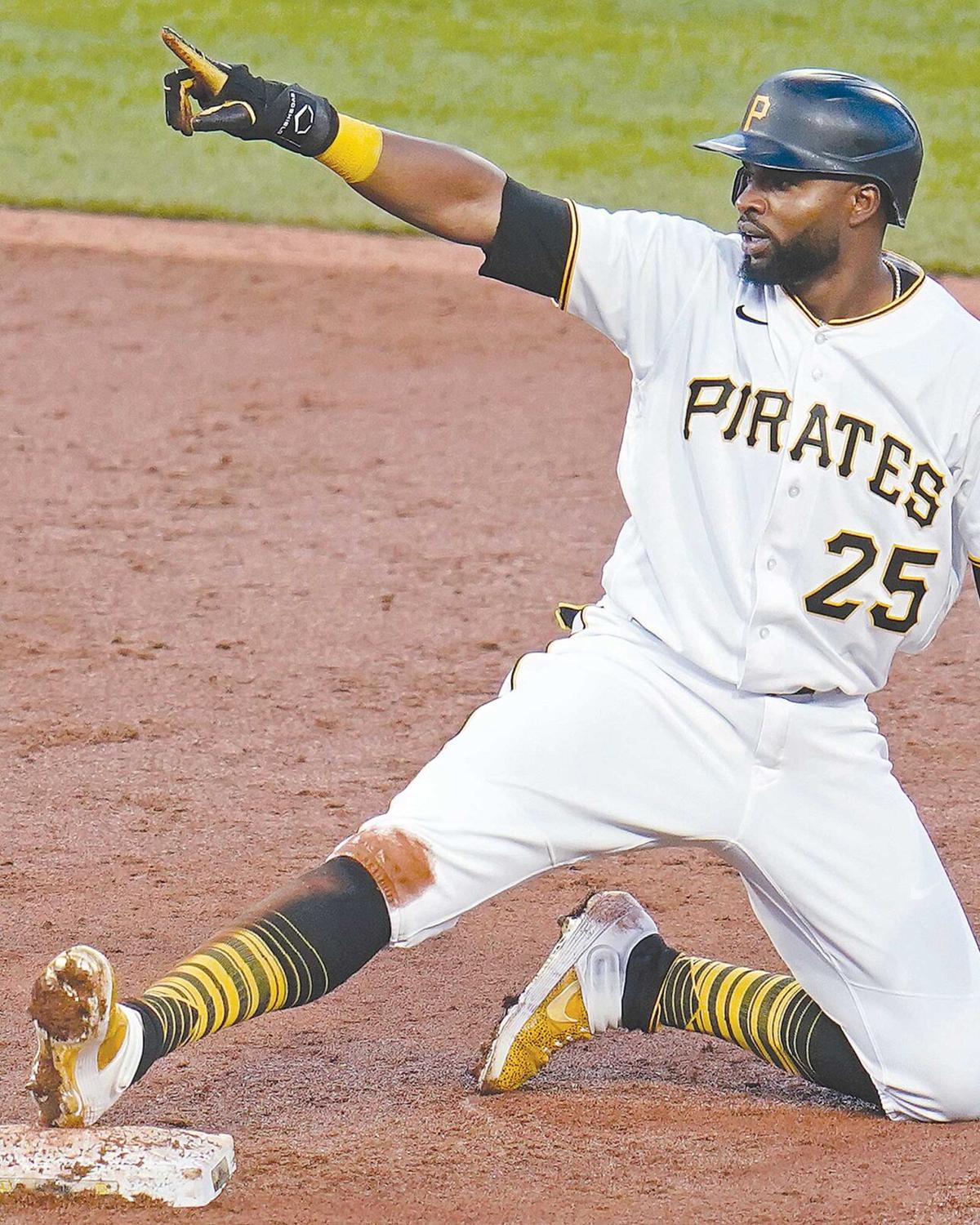 Photo by AP. Pittsburgh's Gregory Polanco motions to the dugout after stealing second base during the third inning Friday night.

Photo by AP. Pittsburgh's Ke'Bryan Hayes (right) is greeted by Bryan Reynolds after socking a two-run homer in the first inning.

Photo by AP. Pittsburgh's Gregory Polanco motions to the dugout after stealing second base during the third inning Friday night.

PITTSBURGH (AP) - Rookie Ke'Bryan Hayes homered for the second game in a row since being activated from the injured list and drove in three runs to lead the Pittsburgh Pirates to a 9-2 victory over the Miami Marlins on Friday night.

Hayes hit a two-run home run in the first inning and an RBI single during a five-run sixth that broke the game open. He also connected Thursday in his first game after missing two months with a sprained left wrist with his father, former major league third baseman Charlie Hayes, watched from the stands.

EVANSTON, Ill. (AP) — Evan Hull rushed for 216 yards and a pair of touchdowns Saturday afternoon to lead Northwestern to a 35-6 win over Ohio.

LONDON (AP) — Dominican boxer Lenin Castillo was taken to the hospital after being carried out of the ring on a stretcher following a devastating knockout by British opponent Callum Smith on Saturday.

NASHVILLE, Tenn. (AP) — JT Daniels threw for 121 yards and two touchdowns playing only the first quarter as No. 2 Georgia dominated Vanderbilt 62-0 Saturday in the Bulldogs' biggest win in a series that started in 1893.

BLACKSBURG, Va. (AP) — Braxton Burmeister threw for 212 yards and a touchdown to lead Virginia Tech to a 21-10 victory over Richmond on Saturday.

LONDON (AP) — Mohamed Salah scored his 100th Premier League goal for Liverpool on Saturday but it was not enough to beat Brentford, which twice pegged the Reds back in a breathless 3-3 draw.

STATE COLLEGE, Pa. (AP) — Sean Clifford passed for four touchdowns and a career-high 401 yards, leading No. 6 Penn State to a 38-17 victory over Villanova on Saturday.

Garcia gets a record, little else at rough Ryder for Europe

SHEBOYGAN, Wis. (AP) — Nobody has collected more wins at the Ryder Cup than Sergio Garcia.

LIVERPOOL, England (AP) — Norwich lost its sixth straight Premier League game of the season on Saturday, beaten 2-0 by Everton at Goodison Park with goals from Andros Townsend and Abdoulaye Doucoure.

Larson returns to Las Vegas looking for another victory

Overlooked in the post-race spat between Kevin Harvick and Chase Elliott was yet another trip to victory lane for Kyle Larson, NASCAR's championship favorite.

LEICESTER, England (AP) — Jamie Vardy scored an own-goal but still rescued a point for Leicester on Saturday and kept Burnley waiting for its first victory of the season.

Koepka gets no relief at Ryder Cup; saves par anyway

SHEBOYGAN, Wis. (AP) — Brooks Koepka lost a long argument with rules officials who would not grant him relief from an awkward lie near a drain on the 15th hole at the Ryder Cup on Saturday.

Leipzig comes through for Marsch with 6-0 rout of Hertha

BERLIN (AP) — American coach Jesse Marsch wasn’t worried when Leipzig lost three and won only one of its opening five Bundesliga games. Marsch said it was just a matter of time before the results followed.

This Date in Baseball

NUR-SULTAN, Kazakhstan (AP) — There will be a first-time title winner at the Astana Open after two players who had never reached a tour final won their semifinal matches on Saturday.

ST. PETERSBURG, Russia (AP) — French official Luc Tardif was elected president of the International Ice Hockey Federation on Saturday ahead of the return of NHL players to the Olympics in February.

Three years of Gritty: A definitive list of the Flyers mascot’s best and most outrageous moments

What does Gersson Rosas' firing signal for the Marc Lore-Alex Rodriguez regime?

MINNEAPOLIS — During a conversation in Las Vegas last month, new Wolves minority owner Marc Lore expounded upon one of his philosophies of building successful businesses — that each enterprise must have three core values that relate to everything it does as an organization.

LEXINGTON, Ky. — Always a fascinating exercise for followers of college basketball recruiting, the initial RSCI rankings for the class of 2022 were posted this week.

After jumping out of airplanes, Alejandro Villanueva jumps into a new role with the Ravens

Joe Starkey: Steelers offense is a flaming disaster so far

PITTSBURGH — You know what I never want to hear again?

LOS ANGELES —Former USC quarterback Matt Cassel played 14 seasons in the NFL, including four with the New England Patriots as Tom Brady's backup and one with the Detroit Lions as Matthew Stafford's backup. With Stafford and the Rams playing Brady and the Super Bowl champion Tampa Bay Buccane…

A year into his Seahawks tenure, Jamal Adams remains a riddle for Seattle coaches

SEATTLE — There is no shut-down mode for Jamal Adams. The Seahawks safety is always on.

A look at what's happening around the majors today:

SAN DIEGO — Incredibly, the skies opened up here of all places on Friday afternoon, scrambling the Petco Park grounds crew into a rare tarp drill as the San Diego Padres prepared to resume a game that began in rainy Atlanta two months earlier, back when the bullpen was the strength of a play…

By now, none of these things should really surprise anyone about these Seattle Mariners:

$500 REWARD for information leading to the return of a

$500 REWARD for information leading to the return of a 2.…

Friedhaber’s in Oil City is looking for a full time